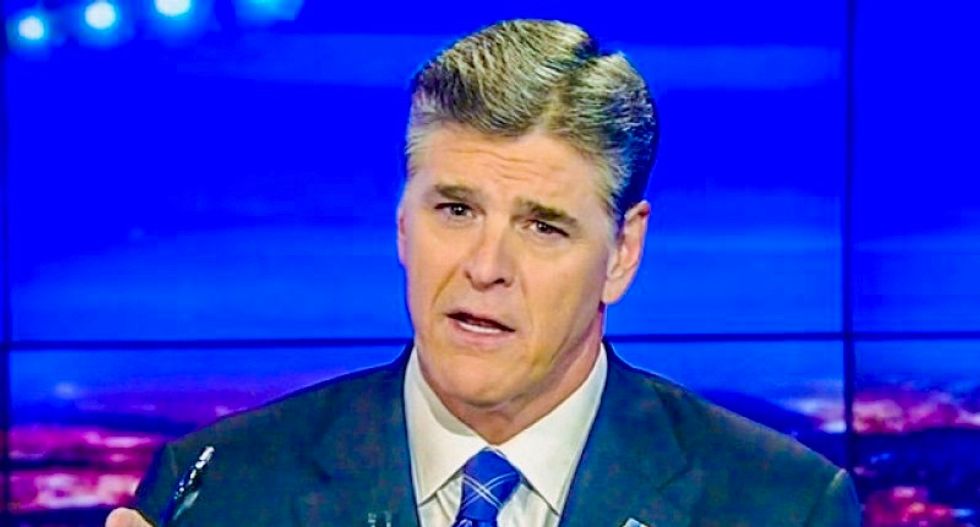 Keeping with the many Republicans out-right defending Alabama's Republican Senate nominee Roy Moore against allegations he had sexual contact with a 14-year-old when he was more than double her age, Fox News host Sean Hannity said on Thursday evening that the allegations are hearsay -- and benefit the Republican establishment.

"John McCain has now just called for Roy Moore to withdraw, whether or not the allegations are true," Hannity told his audience, as per Media Matters. "Okay, so now you've got the swamp, you've got the sewer, you've got the establishment -- they hate Roy Moore. Roy Moore, to , them, is another Ted Cruz, another Mike Lee, somebody they can't control."

"There are false allegations made," the conservative host continued. "You know, I can tell you another thing that is a common practice, people make a allegation at, for example, big corporations. Big corporations, they make a business decision, 'Alright, if I pay $200,000, this goes away, okay, you're out of here, we're done with you, it's all over,' even though they don't believe it happened."

Hannity also defended his former Fox News colleague and personal friend Bill O'Reilly amid the many allegations of sexual harassment leveled against him, which the latter claims were fabricated for attention or money. Before O'Reilly's ouster, it was revealed that he'd settled out of court with multiple women that accused him of assault during his tenure at the conservative news agency.

"As I said on TV tonight, I apologize when I misspoke and was not totally clear earlier today," he said in a statement. "It’s really sad when the lazy media in this country cuts and pastes a deceptive and out of context comment by a Soros funded radical left-wing group that has purposefully taken me out of context for years. My comments on the topic of Judge Moore were clear and unambiguous both on radio and on TV, if people would do their own research and reporting. People need to listen to the totality of my remarks if they care about the truth. I interview guests of all points of view, but I speak for myself."

(Note: This article has been updated with a statement from Sean Hannity.)