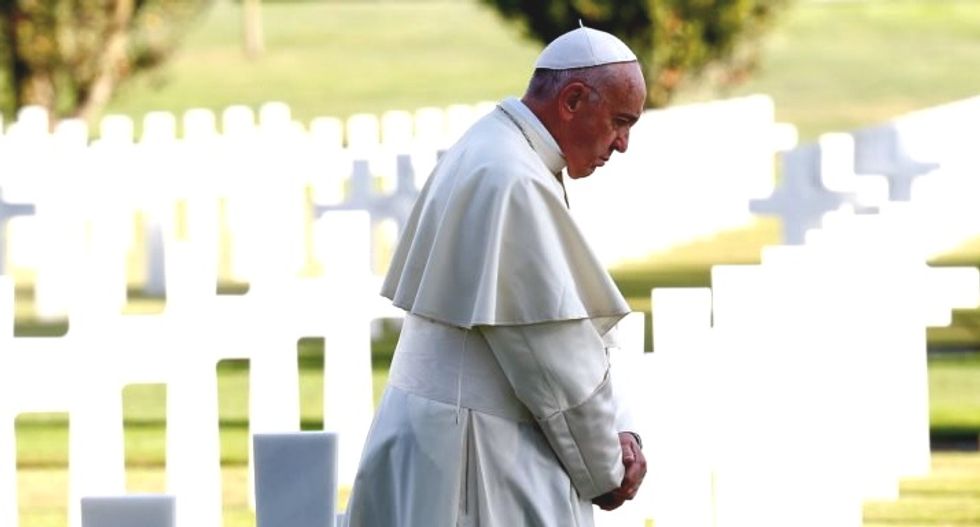 Pope Francis made one of his most emotional anti-war addresses on Thursday, saying during a visit to a U.S. military cemetery that the world seemed to be headed into war perhaps bigger than any before.

Francis said a Mass for several thousand people at the Sicily-Rome American Cemetery in the town of Nettuno, south of the Italian capital, on the day Roman Catholics commemorate their dead.

The burial ground is the final resting place for 7,860 American soldiers who died in the liberation of southern Italy and Rome in 1943 and 1944.

He walked slowly and alone amid the rows of low white headstones in the shape of crosses and Stars of David, gently resting a white rose on about a dozen and stopping to pray silently before saying the Mass.

"Please Lord, stop. No more wars. No more of these useless massacres," he said, speaking in hushed tones in an improvised homily.

Francis said that remembering the many young people who died in World War Two was even more important "today that the world once more is at war and is preparing to go even more forcefully into war."

He did not elaborate but appeared to be referring to the possibility of nuclear war.

As tensions between the United States and North Korea have increased in recent months, Francis has warned that a nuclear conflict would destroy a good part of humanity.

Last April, he said a third country should try to mediate the dispute between Pyongyang and Washington to cool a situation that had become "too hot".

U.S. President Donald Trump, who has said North Korea "will be met with fire and fury like the world has never seen" if it threatened the United States, will visit South Korea as part of a trip to Asia that starts on Friday.

While Trump is in Asia, the pope will be hosting an international seminar at the Vatican that will urge the banning of nuclear weapons.

The cemetery Mass was attended by U.S. Ambassador to Italy Lewis Eisenberg and the acting U.S. ambassador to the Vatican, Louis Bono.

"If today is a day of hope, it is also a day of tears," the pope said. "Humanity must not forget" the tears of mothers and wives who lost husbands and sons in past wars.

"Humanity has not learned the lesson and seems that it does not want to learn it," he said, asking for prayers for the victims of today's conflicts, especially children.

On his way back to the Vatican, Francis stopped to pray at the Ardeatine Caves, where in March, 1944 occupying Nazis killed 335 Italian men and boys as a reprisal for the killing of 33 German policemen by partisans.

They were all shot in the back of the neck. The Germans blew up the caves in a vain attempt to try to hide the massacre.

Seventy-five of the victims were Jews.