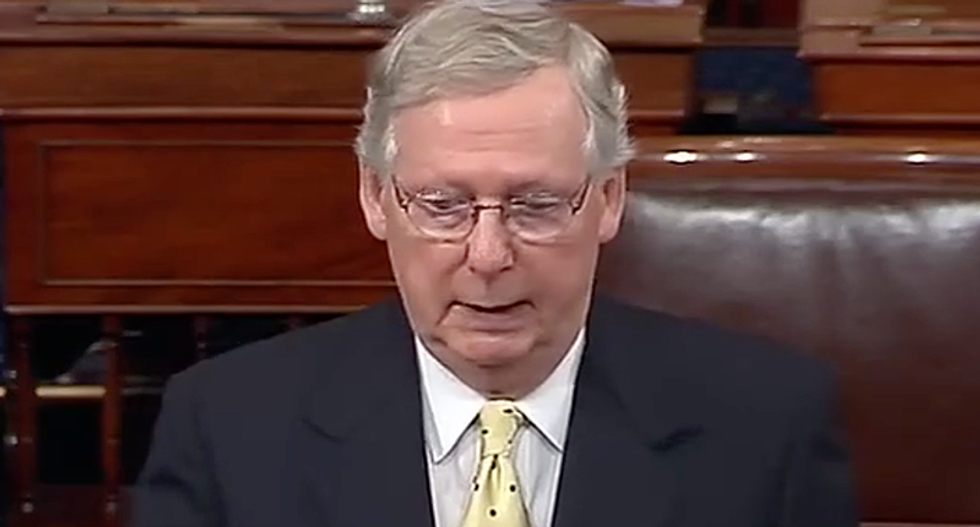 U.S. President Donald Trump's push for a big package of tax cuts moved past a potential obstacle on Tuesday as a Senate panel approved the measure despite lingering concerns from some Republican members.

The 12-11 party-line vote in the Senate Budget Committee, held as protestors shouted in the background in a Capitol Hill hearing room, cleared the way for the full Senate to vote on the bill.

That vote could happen as early as Thursday and would give Republicans powerful momentum for their top legislative priority.

The House of Representatives has already approved its own version of tax-cut legislation. The two versions would need to be reconciled before a measure could go to Trump for his signature.

But Republican leaders said they have yet to round up the votes needed for passage in the Senate, where they hold a narrow 52-48 majority.

"It's a challenging exercise," Senate Republican Leader Mitch McConnell said at a news conference. "Think of sitting there with a Rubik’s cube."

Republicans, who control both chambers of Congress and the White House, have yet to score a major legislative victory since Trump took office in January. After a failed push this year to repeal former President Barack Obama's healthcare legislation, they are eager to score a win before next year's midterm elections, when control of the House and the Senate is at stake.

Meanwhile, a new battle opened on another front as Democrats canceled plans to meet with Trump to discuss spending, immigration and other issues. Lawmakers must renew government funding before it expires on Dec. 8. Democrats hope to use their leverage on the budget issue to renew protections for young immigrants who entered the country illegally as children.

Republicans want to push their tax-cut package through the Senate ahead of the budget showdown and get a final version to Trump's desk before the end of the year.

As the committee voted, Republican Senator Bob Corker said he had worked out a deal that satisfied his concerns that the tax cuts could add too much to the national debt.

The tax plan, as written, would widen the U.S. budget deficit by $1.4 trillion over 10 years, but Republicans say that gap would be narrowed by additional economic growth.

Corker said the bill would be modified to automatically raise tax revenues if growth targets were not reached.