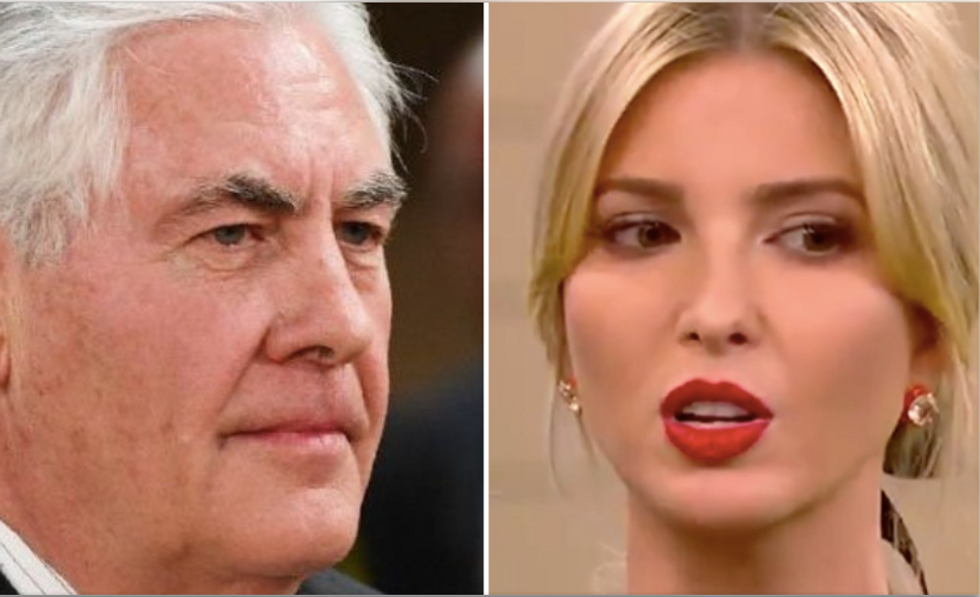 Secretary of State Rex Tillerson is reportedly undermining an upcoming trip to India by President Donald Trump's elder daughter Ivanka in order to remind the Trump family that he is the nation's top diplomat and as a rebuke to Ms. Trump and her husband Jared Kushner.

CNN said Saturday that the president's daughter is slated for her most prestigious appearance since her father took the White House -- a speaking engagement at the Global Entrepreneurship Summit in Hyderabad at the end of November.

However, former ExxonMobil CEO Tillerson has reportedly felt too many times during his term that his role has been circumvented or overruled by Ms. Trump and Kushner and is using her speaking engagement -- which she accepted at the behest of India's Prime Minister Narendra Modi -- as a lesson in humility by declining to send a full compliment of State Department personnel along with Ms. Trump.

"They (Tillerson and his staff) won't send someone senior because they don't want to bolster Ivanka. It's now another rift between the White House and State at a time when Rex Tillerson doesn't need any more problems with the President," said an official to the network.

"Rex doesn't like the fact that he's supposed to be our nation's top diplomat, and Jared and now Ivanka have stepped all over Rex Tillerson for a long time," the source continued. "So now, he's not sending senior people from the State Department to support this issue. He's not supporting Ivanka Trump."

Tillerson and Pres. Trump have reportedly disagreed on key issues and at one point Tillerson reportedly called the president a "moron." However, he has declared that he has no intention of leaving his post.

Vanity Fair's Emma Stefansky wrote, "Tillerson remains somewhat of an outlier in Trump’s cabinet, where according to my colleague Abby Tracy he routinely holes himself up in the State Department’s seventh-floor corridor of executive suites. But if he’s hoping to win a war of attrition against the Trump family, he may be in for a long winter."