Senate candidate Moore's wife says 'he will not step down' 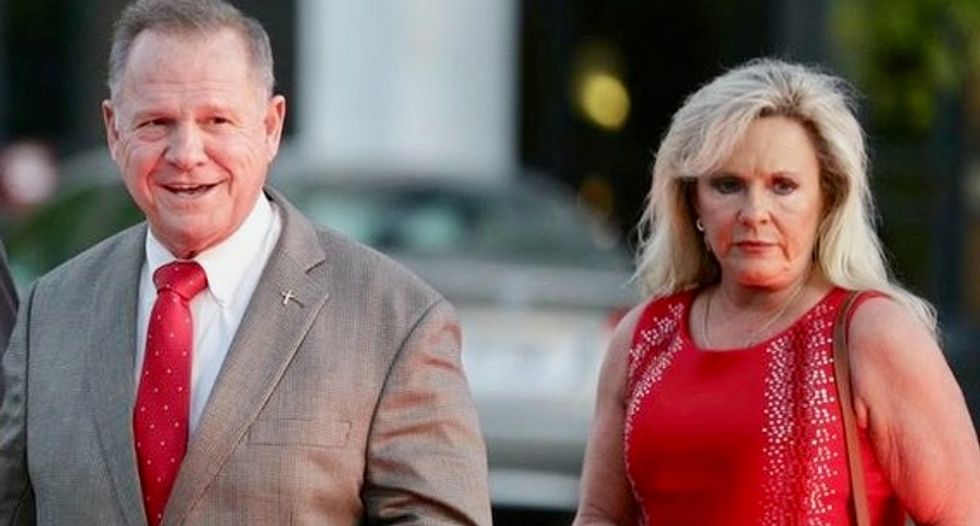 Republican Roy Moore, along with his wife Kayla, arrive at the RSA Activity Center in Montgomery, Alabama, U.S. September 26, 2017, during the runoff election for the Republican nomination for Alabama's U.S. Senate seat vacated by Attorney General Jeff Sessions. REUTERS/Marvin Gentry

The wife of Republican Alabama U.S. Senate candidate Roy Moore said on Friday her husband would not end his campaign in the wake of sexual misconduct allegations, dismissing reports about his past behavior toward some women as political attacks.

"He will not step down," Kayla Moore said at a news conference on the steps of the state capitol in Montgomery. "He will not stop fighting for the people of Alabama."

The news conference was the second in two days held by Moore's supporters. His campaign has been in turmoil since the Washington Post published a story last week detailing the accounts of three women who claim Moore pursued them while they were teenagers and he was in his 30s. More women have since spoken out with allegations of their own.

Reuters has been unable to independently confirm any of the allegations or accusations.

Two recent polls show Moore trailing Democrat Doug Jones ahead of the Dec. 12 special election, with Fox News releasing one on Thursday showing Jones ahead with 50 percent to 42 percent for Moore.

Kayla Moore challenged the Post's reporting on her husband's past misconduct.

She also noted that the paper endorsed Hillary Clinton over President Donald Trump in last year's election, accusing it of being part of a concerted effort to push back against anti-establishment conservative candidates.

"All of the very same people who were attacking President Trump are also attacking us," she said.

The Post's editorial board, which endorsed Clinton, works separately from the reporters and editors who work on news stories, as is common at many newspapers.

Asked about Moore, White House legislative director Marc Short on Friday said the White House has said Trump had already previously backed Moore's opponent, Luther Strange, in the primary contest and that Moore's explanations "so far have not been satisfactory."

"At this point, we believe it is up to the people of Alabama to make a decision," Short told CNN in an interview shortly after Moore's wife spoke. "The president chose a different candidate."