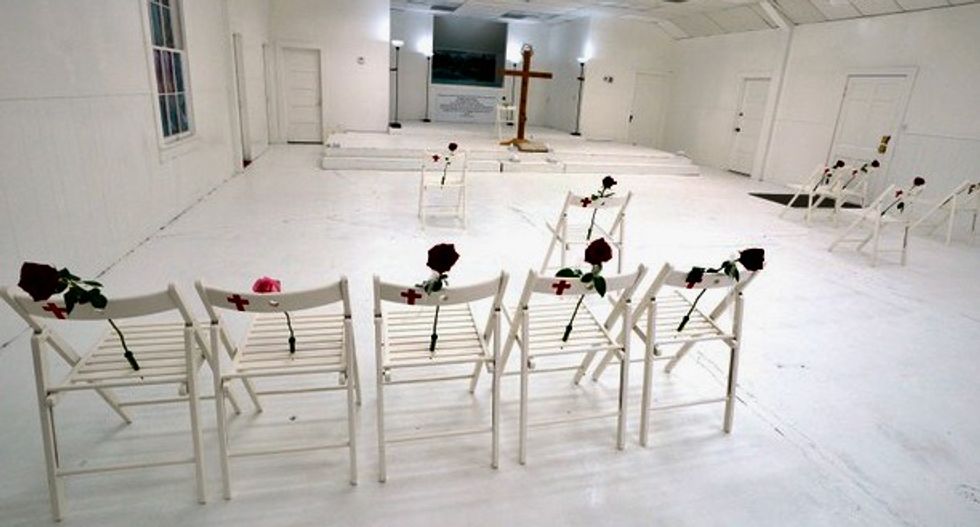 Chairs and roses show where Crystal Holcombe (3rd L) and her unborn child were found dead at the First Baptist Church of Sutherland Springs where 26 people were killed one week ago, as the church opens to the public as a memorial to those killed, in Sutherland Springs, Texas, U.S. November 12, 2017. REUTERS/Rick Wilking

The modest Texas church where a gunman massacred more than two dozen worshipers last week reopened as a memorial on Sunday, giving the public its first glimpse of the site where one of the most shocking mass shootings in U.S. history unfolded.

Signs of the rampage that officials said took 26 lives and wounded 20 others were muted at the First Baptist Church of Sutherland Springs after a weeklong effort to transform its devastated sanctuary into a shrine honoring the deceased.

All the pews, carpets and church equipment had been removed, and the floors were still sticky from fresh coats of paint. The windows were painted over in swirling watercolors.

White, wooden folding chairs were placed in no regular pattern throughout the church, with each marking the precise spot where a victim's body was found. A single rose, decorated with white ribbon, graced every seat, with the victim's name written in gold cursive script on its back along with a cross painted in red.

As members of the media were escorted four at a time through the chapel, a recorded voice could be heard reading verses of scripture. Outside, as a steady rain fell, about 100 family members and others waited to pay their respects.

Construction crews worked around the clock for 72 hours to make the church “presentable to those families,” Associate Pastor Mark Collins said.

Earlier, Pastor Frank Pomeroy led a gathering of about 500 in Sunday services held in a tent erected in a muddy athletic field, a short walk from the church.

"We have the freedom to take that building that was attacked, transform it through the love of God and into a memorial to remind everyone so that we will never forget - love never fails," the pastor said.

Pomeroy was out of town at the time of the attack, but his 14-year-old daughter was among those killed by Devin Kelley, a former U.S. Air Force officer thrown out of the service after his conviction in 2012 for assaulting his wife and stepson. After the massacre, Kelley killed himself.

"The media is amazed that we are not angry, that we are not calling for this or that," Pomeroy told congregants with an air of defiance mixed with visible grief. "Folks, we have the freedom to choose, and rather than choose darkness, as one young man did that day, I say we choose light."

The congregation gave thunderous applause. Some waved Bibles in the air. Near the back stood a dozen bikers from a nearby chapter of Harley-Davidson motorcycle riders.

The members of the church will make a decision “in the far future” about whether to demolish the structure, Collins said. Some families have said they never want to step foot in the building again, he said.

In the meantime, it will serve as a memorial open to the public on Monday through Friday. Regular Sunday services will resume in a temporary structure set up somewhere on church property.