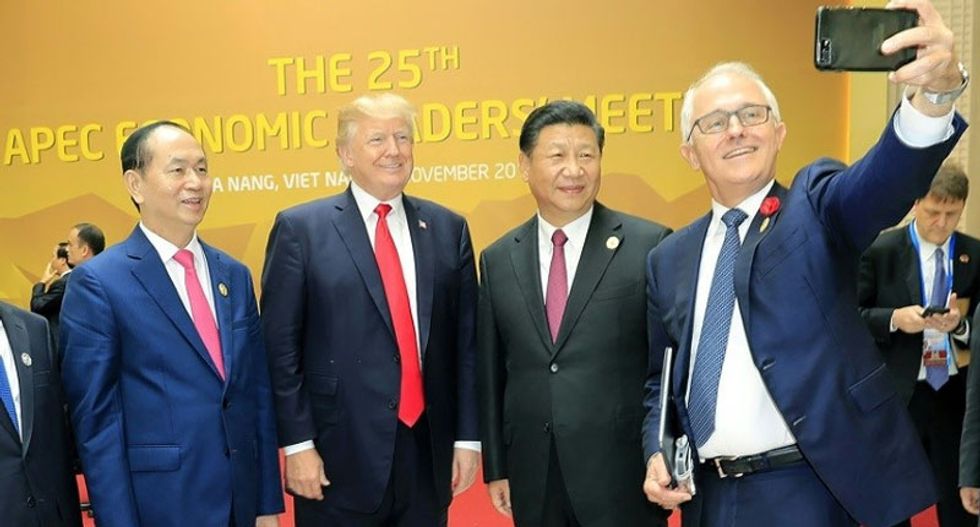 Donald Trump's marathon Asian trip passed off without any major incident, but for all the pomp and ceremony thrown his way, analysts say the tour ended with little to show in the way of concrete achievements.

Regional leaders vied with each other during the five-nation sweep to fete a president known for his partiality to grand gestures of honour and respect.

And it clearly worked.

"It was red carpet like nobody, I think, has probably ever received," Trump said.

In Tokyo, a golfing date with Japanese Prime Minister Shinzo Abe was followed by a gala dinner and in Beijing he toured the Forbidden City as part of an extravagant "state visit-plus" which also included a performance of Peking Opera.

In Seoul, South Korean President Moon Jae-In gave a presidential toast in honour of a man who "is already making America great again".

The gaffe-prone Trump -- who has little love for long foreign trips -- navigated the tricky visits without incident, appearing relaxed and comfortable.

- 'Nothing has really changed' -

From Tokyo to Manila, via Seoul, Beijing, Danang and Hanoi, the 71-year-old president hammered out two priorities: increasing pressure on North Korea over its nuclear weapons programme and pushing for better access to Asian markets for US companies

But beyond the rhetoric and smiling photo opportunities, questions remain as to what progress he actually made on either issue.

"If you compare the before and after of Trump's Asia tour, nothing has really changed (on the issue of North Korea)," Go Myong-Hyun, an analyst at the Asan Institute for Policy Studies --a Seoul-based think tank -- told AFP.

Some experts note, however, that the meeting between the presidents of the top two world powers could bear fruit in the medium term.

"Xi Jinping gave Trump a huge welcome.... so China and US relationship is relatively stable at the moment. Under such an atmosphere, Xi Jinping won't completely reject Trump' demands," said Cheng Xiaohe, associate professor of international relations at Renmin University in Beijing.

On the issue of trade, it was also unclear whether Trump -- who has accused his Democrat and Republican predecessors of having failed for decades on international deals -- managed to bag any major wins.

Beijing announced it would be easing limits on foreign ownership in the financial sector, but numerous obstacles remain.

The US president announced some $250 billion worth of contracts with China, but many were non-binding memorandums of understanding which will take years to bear fruit, if they ever do.

Before leaving, Trump said he would deliver his own verdict on the trip when he returns to Washington.

"We've made some very big steps with respect to trade, far bigger than anything you know," he said, without elaborating.

The visit also provided disappointment on the long-term aim of a change in geo-strategic relations in the region.

Trump's speech at the APEC regional forum in Danang, praised in advance by the White House, was at times reminiscent of his election campaign rallies on the theme of "America First".

Drawing a picture of the United States as a victim of "chronic trade abuses", he slammed multilateral agreements that "bind the hands" of his country.

Back in 2011, the US proposed the concept of a free and open "Indo-pacific region" but Trump has yet to spell out what that might mean, said Yoshinobu Yamamoto, professor of international relations at the University of Niigata Prefecture.

"We'll have to see what kind of substance will be achieved through the concept," he added.

According to Ryan Hass, former Asia adviser to Barack Obama, the presidential trip reinforced the impression that "the region is accelerating forward while the United States is looking backward".

The decision of ministers from 11 Asia-Pacific countries to press ahead with a major trade pact without the United States was particularly striking, he said.

Hass also highlighted the comparison between Xi Jinping's calls for the region to "come aboard the fast train of Chinese development" and the economic nationalism of his American counterpart.

On the personal side, even if his chummy rapport with Abe, both on the golf course and beyond, proves genuine, his relationship with Xi will be infinitely more complex.

Trump has said he has "a very good relationship with Xi", who he described as "strong... the most powerful Chinese leader since Mao Zedong".

But it is difficult to predict how the relationship will evolve in the coming years if tensions spike.

Almost seven weeks have passed since the January 20 inauguration of President Joe Biden and Vice President Kamala Harris, and some Republicans are still clinging to the far-right conspiracy theory that former President Donald Trump was the victim of widespread voter fraud during the 2020 presidential election. When Mississippi Gov. Tate Reeves was interviewed by CNN's Jake Tapper on March 7, he echoed the Trumpian talking point that mail-in voting promotes voter fraud.

Tapper told the GOP governor, "I want to ask you a simple yes or no question because your answer a few weeks ago to a colleague kind of raised my eyebrows: Do you accept that Joe Biden is the legitimate and lawfully elected president of the United States?"

Sen. Tom Cotton (R-AR) on Monday attacked the American Rescue Plan that passed the Senate over the weekend -- but he quickly faced backlash.

Specifically, Cotton attacked the bill for sending $1,400 relief checks to prisoners, despite the fact that the CARES Act that passed with Republican support in 2020 also sent prisoners checks.