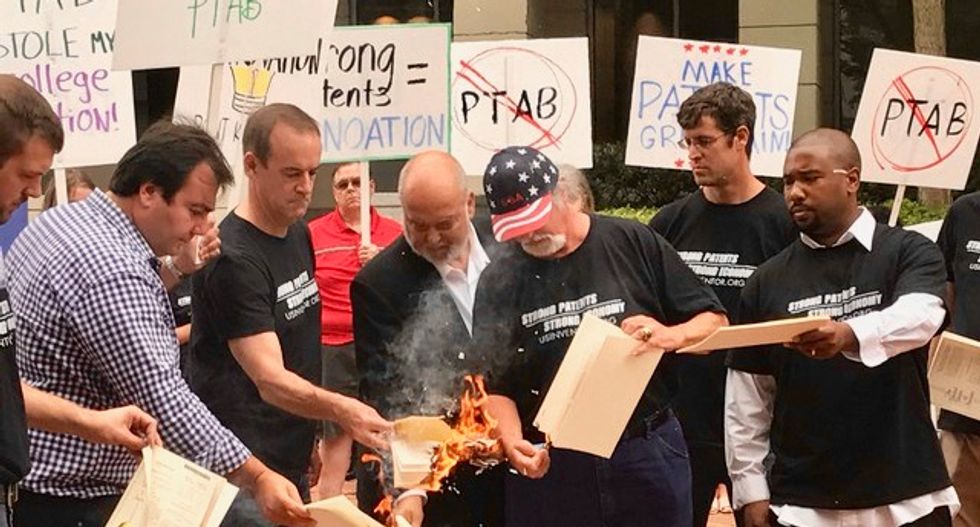 In August, a dozen inventors gathered around a fire pit outside the headquarters of the U.S. Patent and Trademark Office in Alexandria, Virginia, and set alight patents they said had been rendered worthless by an overreaching federal government.

"It's time for us to make patents great again," Michael Caputo, an advisor to Donald Trump's presidential campaign, told those gathered. US Inventor, the group behind the protest Caputo now represents as a spokesman, is calling for the abolition of the U.S. Patent Trial and Appeal Board, an administrative tribunal run by the patent office that reviews the validity of patents.

The rallying cry marks an about-face for some conservatives, who broadly supported the board's creation in 2011 as a way to rein in trial lawyers and "patent trolls," who hold patents for the sole purpose of suing big companies for licensing fees.

"Things have really flipped when it comes to the conservative perspective on patents," said Charles Duan, a lawyer with left-leaning consumer group Public Knowledge.

Much of the credit goes to activists who have convinced many conservatives that the real problem is not out-of-control litigation but how the tribunal designed to speed up resolving patent disputes favors big business over smaller rivals.

The change of positions has been aided by deepening right-wing distrust of tech giants, such as Apple Inc and Alphabet Inc's Google, which have benefited the most from PTAB while embracing liberal causes like immigration or gay and transgender rights. (Graphic: http://tmsnrt.rs/2A1LfXV)

The U.S. Supreme Court is due to rule sometime next year on whether the tribunal is an unconstitutional intrusion of the executive branch onto matters reserved for the courts and influential conservative groups are already weighing in.

The Heritage Foundation, the Cato Institute, Federalist Society, and the American Conservative Union have published articles or submitted briefs arguing that PTAB should be abolished.

Most legal experts expect it to survive, though, noting the Supreme Court has largely accepted the powers of executive-branch courts in other areas, such as public employee benefits. The mounting criticism of PTAB could still convince the court's conservative justices to vote for abolition, said Q. Todd Dickinson, a lawyer with the firm Polsinelli and a former director of the patent office.

The advocacy effort by conservative groups could also convince the Trump administration to curb the patent board's power, Dickinson said.

More than 70 percent of the Republicans in Congress backed the legislation that created PTAB. At the time, the U.S. Chamber of Commerce said the law would "help reduce unnecessary litigation against American businesses."

U.S. Representative Thomas Massie, a Kentucky Republican who holds patents relating to computer interfaces, was not in Congress at the time the board was created, but said conservatives' initial intent to curb excessive litigation has gradually given way to fears that PTAB is helping the wrong businesses.

The board's creation was pushed by big tech companies, banks and retailers, who complained they were being inundated with "troll" lawsuits.

Successfully defending a patent case in federal court often takes years and costs millions of dollars, escalating pressure to settle. PTAB offered a cheaper and faster alternative. The average cost of litigating a PTAB petition to a final decision is about $250,000, according to patent risk management company RPX Corp.

There are no juries and limited live witness testimony in PTAB proceedings, and its administrative judges apply a lower standard of proof than would be required in federal court.

About 80 percent of the patents that PTAB makes final decisions on are either partially or fully invalidated, according to a report issued in October by the patent office. But the agency also said 56 percent of patents challenged at PTAB are upheld, in part because the court frequently declines requests to review patents.

A spokesman for the patent office declined to comment.

Inventors say PTAB has made it much harder to get patents licensed by big technology, which now routinely respond to patent infringement claims by initiating PTAB proceedings.

"Patents owners who don't have the wherewithal to withstand serial challenges to the validity of their patents just can't license them," said David Pridham, chief executive of Dominion Harbor, a firm that owns and attempts to license former Eastman Kodak Co patents.

Paul Morinville, a cowboy hat-wearing entrepreneur from Indiana and the founder of US Inventor, said it has become harder for him to get funding for his business based on software patents he holds.

Morinville has been speaking to Republican lawmakers and their staffers for the past four years and many conservatives credit his group with raising alarm about the patent tribunal.

"They are as close to your iconic garage inventor as you can get, so their stories really resonate," said James Edwards, a conservative lobbyist focused on patent law.

While conservative groups have been most vocal, the debate transcends party lines. Some Republicans, such as Representative Darrell Issa of California, keep supporting the PTAB, while some Democrats have joined Republicans in calls to curb its powers.

Many trial lawyers whose case loads have fallen also oppose it.

But many liberals have embraced PTAB as a means of eliminating brand-name pharmaceutical patents that keep drug prices high.

Generic drug makers and large tech companies are also among the board's supporters, arguing it has actually increased competition by weeding out low-quality patents.

The conservative backlash in part reflects how the right views tech giants like Apple and Google, which thanks to the tribunal have prevailed in hundreds of disputes with patent owners seeking hefty compensation.

"Google, Amazon, and Apple and other big tech companies - you look at their power and it is really astounding. And they are generally left-leaning companies," said Matthew Dowd, a conservative patent lawyer in Washington D.C. who has represented US Inventor. "Those dynamics are definitely playing into the increasing willingness of conservatives to speak up about patents."