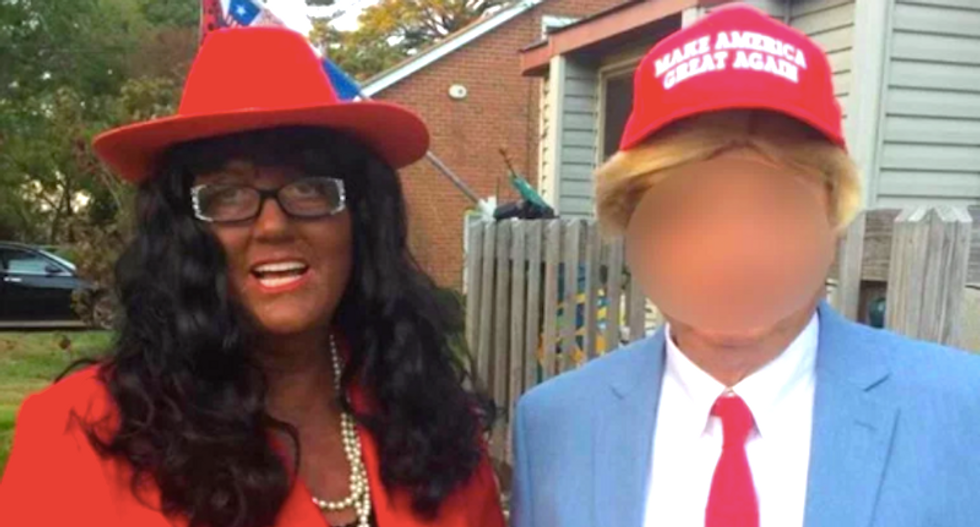 Deputy Jean Browning and her boyfriend dressed in costumes (WTKR)

A Virginia sheriff defended one of his deputies who dressed in blackface as a Democratic congresswoman for a Halloween costume.

The local chapter of the NAACP issued a statement condemning the deputy and calling for her removal from the York County School District, where she works as a DARE program instructor.

"Deputy Browning’s decision to dress in blackface was wholly inappropriate and completely unacceptable," the York-James City-Williamsburg Branch of the NAACP said in a statement.

The civil rights group said the deputy should be fired, but the sheriff said Browning would be reassigned to another position but keep her job.

"A deputy appeared in a Halloween costume depicting Congresswoman Wilson as a well-dressed person wearing the Congresswoman’s signature red hat," said Sheriff J.D. Diggs. "She did not mock her or make any attempt to degrade her. Deputy Browning’s intent was simply to portray Wilson as a political celebrity as Browning’s boyfriend was in a costume portraying Donald Trump."

Wilson and Trump publicly feuded the week before Halloween over the president's call to Myeshia Johnson, the widow of Sgt. La David Johnson, one of the soldiers killed last month in an ambush in Niger.

"The combined intent of the couple was to convey the message of how funny it would be for two political figures that were at odds with each other to go to a party together," the sheriff added. "There was no intent to either mock or degrade either Congresswoman Wilson or President Trump, or for that matter to even make any kind of political statement."

Diggs met with the civil rights group last week to discuss the issue, and he expressed surprise that the NAACP issued a press release publicizing the deputy's conduct instead of contacting him directly.

"Between our meeting and the phone conversation, I felt that it was understood that I agreed that some type of corrective action would be taken, but that action would be a personnel matter and was not a matter that could be discussed because of privacy issues," Diggs said.

He suggested sensitivity training for Browning, and he also directed his staff to search for additional training.

"Browning has been a deputy for 20-years and a D.A.R.E. Officer for 10-years with 9 Letters of Commendation," he said. "She has never been accused of any type of racial transgression and is known as a kind and caring person who would do anything for anyone."