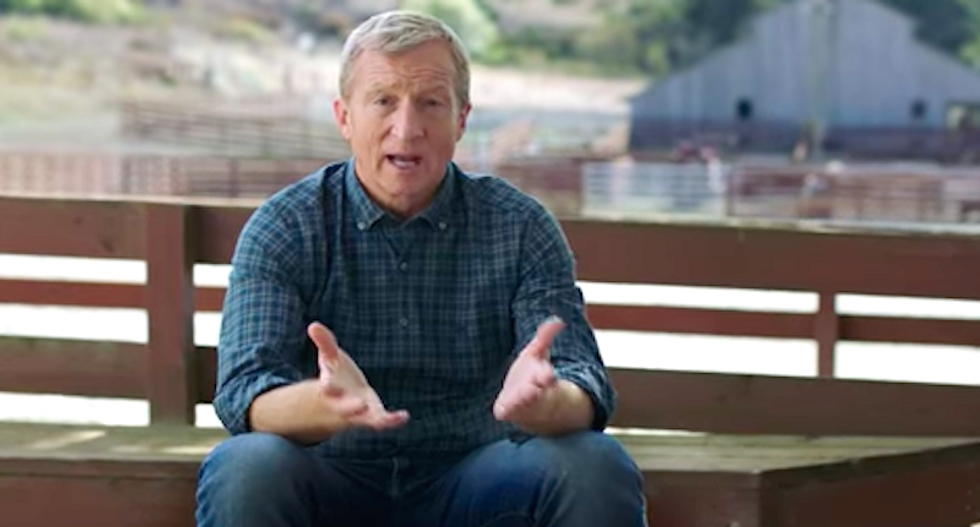 Billionaire Tom Steyer has spent more than $20 million on a series of television ads attacking President Donald Trump and calling for his impeachment. However, an interview with Politico revealed that Steyer is also building his own digital army that can combat the Russian bots that helped manipulate social media to promote Trump-approved messages.

While Democratic Party officials have been dismissive of Steyer and called his investment nothing more than a "vanity project," nearly 4 million people have signed his petition to impeach, and his goal was only 5 million. With a new ad beginning Christmas Day, Steyer says he has built an army he hopes can be a collective voice to ensure the will of the American people is followed.

“That’s how you build a grassroots operations for a presidential campaign," GOP consultant Mike Madrid told Politico. "And if you are that guy who started this, that’s certainly a leg up in organizing a 50-state strategy. That’s what he’s building, and it’s probably second only to Bernie Sanders’ list, and may be eclipsing it. Every election cycle has its own dynamics, and whoever is tapping into the sentiments of their own base usually has an advantage.”

He noted that there's an untapped energy among anti-Trump activists that are seeking something in which they can invest their energy. Steyer has given them that something. That "something" — which is breaking digital records, according to experts.

“We have tapped into something much larger than we thought," said Steyer.

The campaign has caused some to wonder if this is the start of a possible presidential run from the former Democratic donor.

“I haven’t ruled it out, and I’m actually trying to determine what will have the most positive differential impact," Steyer told Politico. “I’m absolutely ambitious...to try and be part of the group of people who gets America back on a just and prosperous course.”

He noted, however, that he will have to make a decision soon and the determining factor for him is in deciding “what can I do to stand up against what I consider to be a deep threat to the safety and health of the American people.”

Democratic consultant Dave Jacobson explained that “Tom Steyer is broadening his footprint digitally. And if 2016 taught us anything, it’s that conventional norms have been flipped — and your traditional cookie cutter campaigning doesn’t apply. Digital is king.”

According to Jacobson, Steyer obviously "set his sights on building up a national apparatus; he’s capitalizing on the new norm, which is digital persuasion."

Erik Olvera, communications director for NeedtoImpeach.com, explained that the accomplishment was part of what Steyer set out to do.

It's “a digital army, this movement all through digital platforms," she said. "He’s reached out to millions of people through Facebook and Twitter — and he has made them feel part of something.”

These people’s voice, together, can be an incredibly strong force for change," Steyer told C-SPAN in an interview.

Democratic strategist Garry South, who once advised Al Gore and Joe Lieberman, doesn't see the point. He told Politico that 4 million names on a petition to impeach doesn't equal 4 million people willing to send money to fund a campaign. He didn't comment on whether or not 4 million volunteers knocking doors would matter.

Instead, South would rather see Steyer going after the recent purchase of local news stations by right-leaning Sinclair Broadcasting. This in an era when 47 percent of Millennials, the largest generation in history, admit that they don't watch television.

“As much as I hate Trump, I think [the impeachment drive] is off-message for Democrats," he said. “Remember, a Democratic president — Bill Clinton — was impeached by Republicans, and it boomeranged on them.”

UC Berkeley pollster Mark DiCamillo argued Steyer has already done something by getting Trump's attention and causing the president to unload in a Twitter rant.

“Tom will be a player in the 2018 mid-terms. I mean, there’s no question about it,” said longtime Democratic funder Larry Stone. “Democrats are pretty optimistic right now, with significant justification, and I love Tom Steyer.”

“I don’t believe that it’s in the Democratic Party’s interest to pursue, to seriously pursue impeachment of Donald Trump," he said. “But I think it’s great to talk about it every day.”