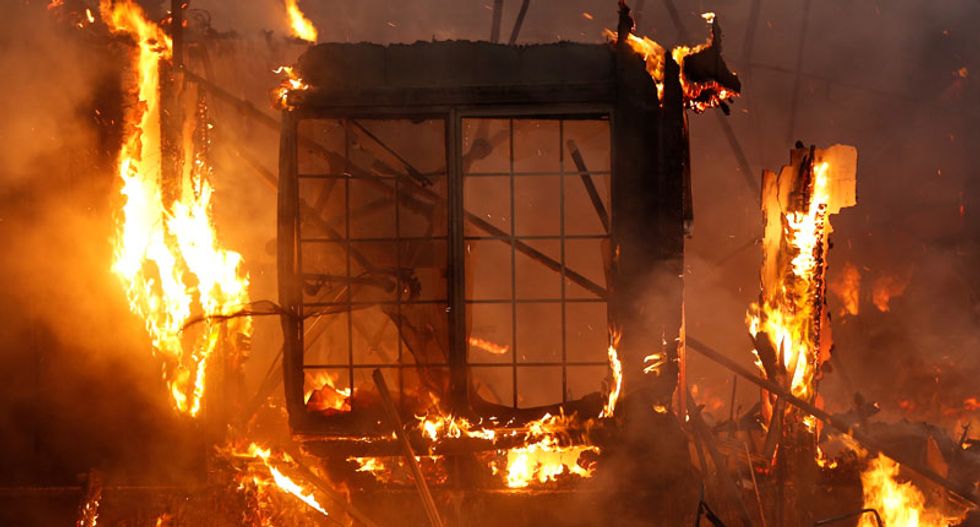 A burning structure is seen at the Hilton Sonoma Wine Country during the Tubbs Fire in Santa Rosa. REUTERS/Stephen Lam

Wildfires raging across Southern California are taking a toll on the region's iconic film industry, forcing producers of commercials, television shows and even student films to pause or seek alternate shooting locations.

The Los Angeles Police Department on Wednesday suspended permitted filming in zones near the fires as well as other areas deemed to be at severe risk of burning. Applications for filming in the Angeles National Forest were also halted this week.

Movie studios set up in California in part because of great weather and varied scenery, from rugged mountains to manicured mansions. More than 200,000 people have been forced to evacuate Southern California fires which poured smoke into neighborhoods miles away.

The mountain neighborhoods impacted by the fires are "highly desirable" locations for filming because they often have large houses with distinctive architecture, said Phil Sokoloski, a spokesman for Film L.A., which coordinates film permits for the city of Los Angeles and other governments in the region.

Film L.A. has spent this week helping productions find and secure permits for alternate locations such as parks on flat land or neighborhoods that have similar-looking homes. Several of the city's major parks were reopened to filming on Friday, and Sokoloski said he expected those to be popular alternatives.

"Everyone is usually rushing to complete production ahead of the holidays," said Sokoloski. "This may put some additional time pressure to finish their work before the holiday season."

"Westworld", the science fiction TV series by Time Warner Inc's HBO , was among the productions that were temporarily halted on Tuesday due to nearby wildfires.

Later that day, one of the show's stars, Evan Rachel Wood, on Instagram jokingly posted "Meanwhile, at work today..." alongside images of billowing dark smoke and a fire-breathing dragon.

In some cases, productions outside the fire zones were halted because there were not police or fire department staff required to supervise special effects shoots or control traffic, LAPD Film Unit Supervisor Vincent Aguirre said. They were needed to fight fires.