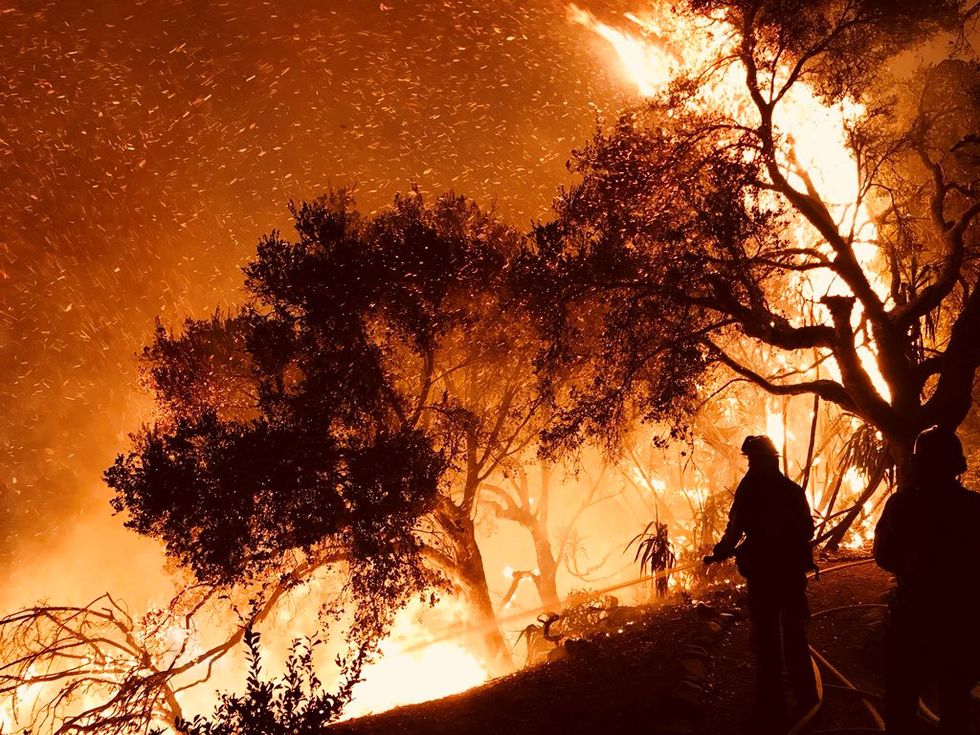 Strong winds that have powered the third-largest wildfire in California's history were expected on Sunday to further fuel a blaze that has burned 267,500 acres.

Nearly 8,500 firefighters are battling the so-called Thomas Fire in Southern California, which began Dec. 4 and has destroyed more than 1,000 structures and threatened 18,000 more, including homes in the wealthy town of Montecito just outside the coastal city of Santa Barbara.

While the winds were expected to ease on Sunday near Santa Barbara, northeast wind gusts up to 55 mph were forecast through Sunday for parts of Ventura and Los Angeles counties, National Weather Service forecasters said.

The blaze, centered less than 100 miles (160 km) northwest of downtown Los Angeles, has forced evacuations that turned neighborhoods into ghost towns and filled the air with smoke.

The fire is now 40 percent contained despite hot Santa Ana winds that have powered its expansion, at times sending embers far ahead of its main flank.

Firefighters were employing more than 970 fire engines and 34 helicopters to battle the blaze.

"It is a beast," Santa Barbara County Fire Department Division Chief Martin Johnson told a news conference on Saturday. "But we will kill it."

Five of 20 most destructive fires in recorded history ravaged the state in 2017, according to Cal Fire.

The Thomas fire, the seventh-most destructive in state history, forced many schools to close for days, shut roads and drove hundreds of thousands from their homes. It was also responsible for poor air quality throughout Southern California.

On Saturday, evacuation orders were issued for parts of Santa Barbara County as high winds whipped the fire through bone-dry terrain.

In Montecito on Saturday, smoke billowing from nearby canyons and pushed by the high winds choked the air, hindering aircraft from dropping flame retardant, the Governor's Office of Emergency Services said. An evacuation order for the city of Ventura was lifted on Saturday morning.