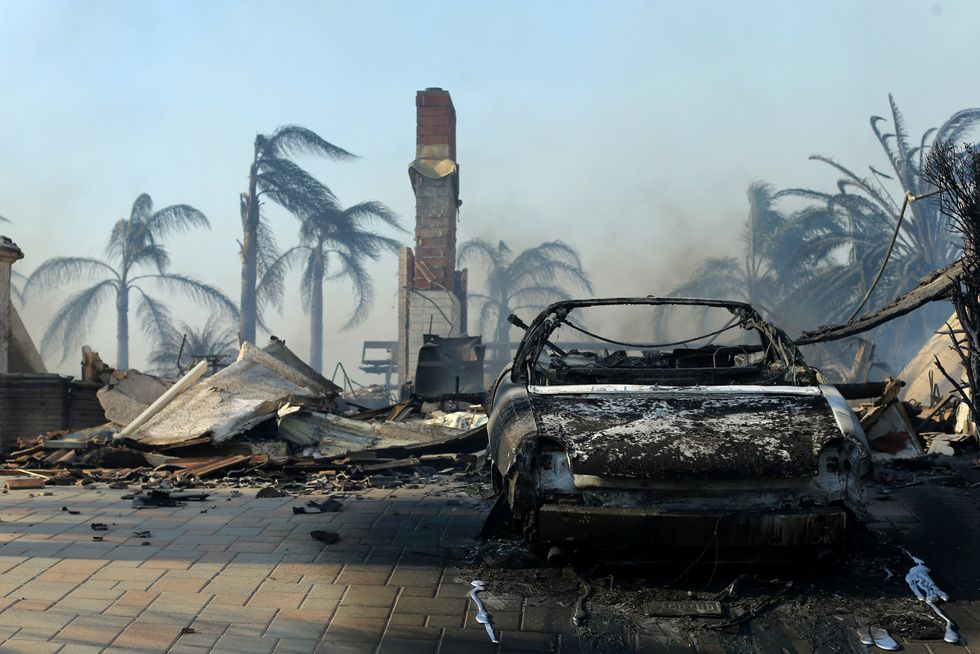 The remains of a home are seen, after it burned to the ground, during a wind-driven wildfire in Ventura, California, U.S., December 5, 2017. REUTERS/Mike Blake

The fire in Ventura County to the west, known as the Thomas Fire, prompted California Governor Jerry Brown to declare a state of emergency after officials said 27,000 people were forced to evacuate and 45,500 acres and 150 buildings were destroyed.

“This fire is very dangerous and spreading rapidly, but we'll continue to attack it with all we've got,” Brown in issuing his emergency proclamation.

In the San Fernando Valley to the north, the so-called Creek Fire destroyed more than 4,000 acres and forced the evacuation of 2,500 homes and a convalescent center north of Interstate 210. The highway remained open even as other roads were closed, officials said.

“We’re chasing the fire, trying to get ahead of it, trying to get in front to provide structure defense," Los Angeles County Chief Deputy David Richardson told a briefing near the San Fernando Valley fire at the foothills of the Angeles National Forest.

Dry Santa Ana winds from the desert, which were forecast to top out at 70 miles per hour (115 km per hour) and remain strong through the week, intensified through the morning and limited the use of fire-fighting aircraft, Richardson said.

"Weather is going to dictate how and when we’re going to utilize the aircraft,” he said, adding that conditions made fire-fighting "extremely difficult."

“We’re ordering additional resources as we speak," he told reporters. "They’re en route to this location at this time.”

The Creek Fire forced the closing of three schools while 11 schools and colleges were closed due to the Thomas Fire as winds pushed both blazes and their smoke toward the Pacific Ocean.