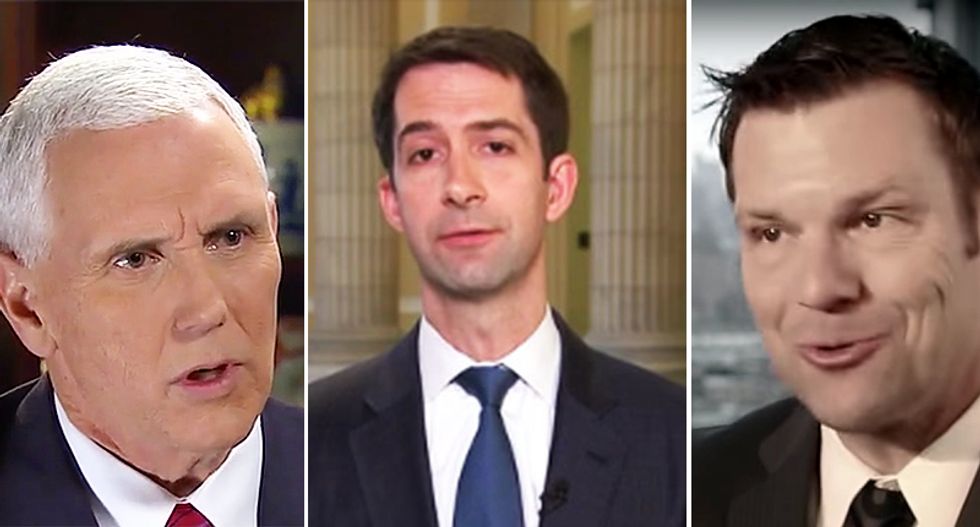 Roy Moore lost Tuesday's election due to people of color, mothers and millennial voters, but a large part of that was his abhorrent beliefs and behavior. However, he's far from the only one.

Moore's anti-women, anti-LGBT, anti-civil rights policies are well known to the world, but there are a slew of Republicans that are so extreme, some are saying the division worse than during the Civil War.

Here are seven far-right Republicans you should know about that have the same opinions as Roy Moore:

There's nothing Kobach wants more than to restrict the voting rights of American citizens. He has worked so hard to spread the myth of voter fraud that his entire party has decided the sky is falling. He's been fighting this battle since long before the fake-ACORN scandal. The New York Times has gone so far as to call out his zealotry as he sits on President Donald Trump's so-called election commission. The fewer people that vote, the more the GOP wins and Kobach seems to have his eye on reducing the number of voters.

He's also made it his mission to go after undocumented immigrants. Working with municipalities and states, Kobach litigated several cases defending laws trying to outlaw undocumented immigrants entirely. It's unclear if Kobach is the one who convinced Trump that there were "three million illegal voters," but it wouldn't be surprising if he did.

It's unclear if Chaffetz's decision to leave his seat is because he wants to pursue another office in Utah or to alleviate the country from suffering the cesspool he's created over his time in Congress. Like many Republicans, he doesn't believe in climate change, civil rights or a woman's right to healthcare and has been known to attack the poor.

"I'm out! I can no longer in good conscience endorse this person for president. It is some of the most abhorrent and offensive comments that you can possibly imagine. My wife and I, we have a 15 year old daughter, and if I can't look her in the eye and tell her these things, I can't endorse this person."

It took just under three weeks to get over the fact that he can't look his daughter in the eye and he re-endorsed Trump.

Things are bad when John Oliver dedicates time to talking about what an embarrassment an official is. Here he is explaining how unnecessary it is to try and humiliate Chaffetz, because he'll end up doing it to himself:

The rumor is that Trump wants to trade out Secretary of State Rex Tillerson for CIA director Mike Pompeo. That would leave an opening at the top of the CIA, which the administration would like to fill with Cotton. Just news of the possibility sent shockwaves through the intelligence community, with opponents describing Cotton as "clueless."

He can't stand Medicaid and the people who are on it, loves the GOP tax plan and on occasion his racism slips out.

This Kansas governor has destroyed the state. The economy is so bad that even Republican state legislators had to raise taxes. Corporations in the state are begging to hand their money over to the government. But what makes Brownback even worse is that when the going got tough, he bailed. To date, Brownback has been begging to be the so-called "religious freedom leader," despite the fact that he doesn't support religious freedom for all religions.

The second Trump was elected to the White House, Brownback bounced so fast it was as if "So long, suckers!" was shoe-polished on the back window of his getaway car. It's one thing to destroy a state, it's another to cut and run like a coward too afraid to admit his failures.

After seeing the failure of Kansas, it's almost as if this homophobic Oklahoma governor said to herself, "how can I be that awful?" The economic policies set forth from Fallin and her ilk in the legislature have caused such a downturn that crucial services are being slashed. While Republicans like to claim they want small government, when it comes to actually implementing that kind of policy the reality comes back to haunt them.

In a state already suffering from the opioid crisis, the only thing the state has done is to cut funding to mental health and substance abuse programs. Over the years the state has also significantly cut senior nutrition programs, assistance payments for foster parents and adoptions, as well as in-home care support for people with developmental disabilities, KFOR reported.

"We've taken quite a few hits over the last few years," said Department of Human Services spokeswoman Sheree Powell. Over the last two years the agency has cut $80 million. "We're now at the point where we're really jeopardizing our ability to implement our programs and serve Oklahomans."

She's not the brightest bulb in the tanning bed. In fact, she couldn't even get a job in the Trump administration.

To make matters worse, her staff isn't the best of people. One is being charged with a felony for offering false evidence of a photo he took up a woman's skirt.

He also opposed giving people the day off for Martin Luther King Day, claiming it was "an insult to all the other taxpayers" who need to reach government offices during that day.

He also hates the poor and follows the Kris Kobach guide to voter suppression.

What happens when the country's leader sitting in the highest office spends as much as eight hours daily watching cable news? The vice president makes decisions. Pence is sneaky and quiet about what he does and knows. Trump is one of the least religious or even spiritual presidents, yet, somehow faith-based initiatives are thriving under his presidency. Trump once proclaimed his pro-choice position, yet somehow his administration seems even more anti-choice than even George W. Bush's administration.

MSNBC's Rachel Maddow has been dogged in holding Pence accountable for his role in the Russia scandal and what he knew about former Lt. Gen. Michael Flynn.

Pence is so bad, one member of his own party have referred to him as a "titanic fraud."

While no one can quite match the evil of an accused child molester, when it comes to racism, homophobia and xenophobia, Roy Moore has a lot of company.