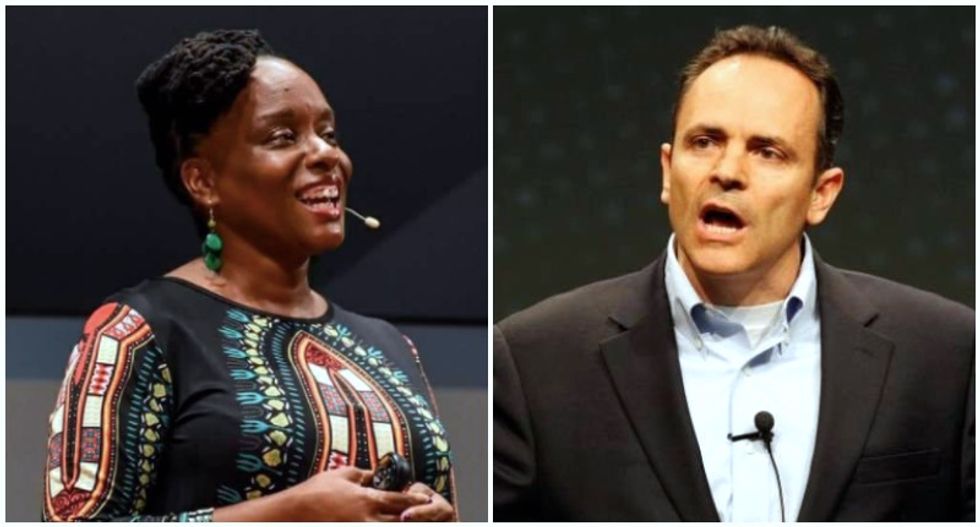 The only black woman serving in the Kentucky state legislature discovered Monday she'd been blocked on Twitter by the Republican governor.

Gov. Matt Bevin (R-KY) generally avoids talking to the media but instead, like President Donald Trump, uses his social media account to communicate with the public.

State Rep. Attica Woodson Scott found she was among the accounts blocked by Bevin, and she called him out on her own social media account.

"Good morning! I was blocked over the weekend from following your governor. Very mature, Matthew," Scott tweeted. ".@GovMattBevin I do not care at all for your politics and cannot imagine how the only Black woman in the Kentucky legislature is a threat to you."

Scott asked whether she was the only state legislator Bevin had blocked from seeing his tweets, or whether his action had anything to do with her race and gender.

"Is it your official policy to block State legislators on Twitter? Or, am I the only one?" she tweeted. "Is this a racist, sexist gesture on your part to block me? It never crossed my mind to block you, governor, despite our political differences."

The lawmaker has been an outspoken critic of the governor, like other members of the state's Democratic Party, although it's not clear how many of those political opponents have been blocked.

"It is clear @GovMattBevin that you are threatened by the one woman of color in the entire legislature," she tweeted. "I have dealt with men like you on many occasions. You feign condemnation of sexual harassment by House members but your (actions) are examples of what happens leading up to assault."

She suggested the social media activity was a form of harassment.

"You cannot force me to bow down to you or approach you in supplication," Scott tweeted. "So, you respond as some men do when rejected. You lash out in ways that are incoherent, lack meaning and fall short of understanding that you are not a deity to be revered."

It's not clear why Bevin blocked the lawmaker, who last week criticized the governor for backing state Rep. Dan Johnson, who was elected despite comparing the Obamas to monkeys and last week took his own life after denying reported sex abuse allegations.

"You are an insult to an office where the temporary occupant should welcome criticism and feedback," Scott tweeted. "You touted yourself as a political outsider yet you cannot handle political truths from another elected outsider of a different gender and race. Tsk tsk."