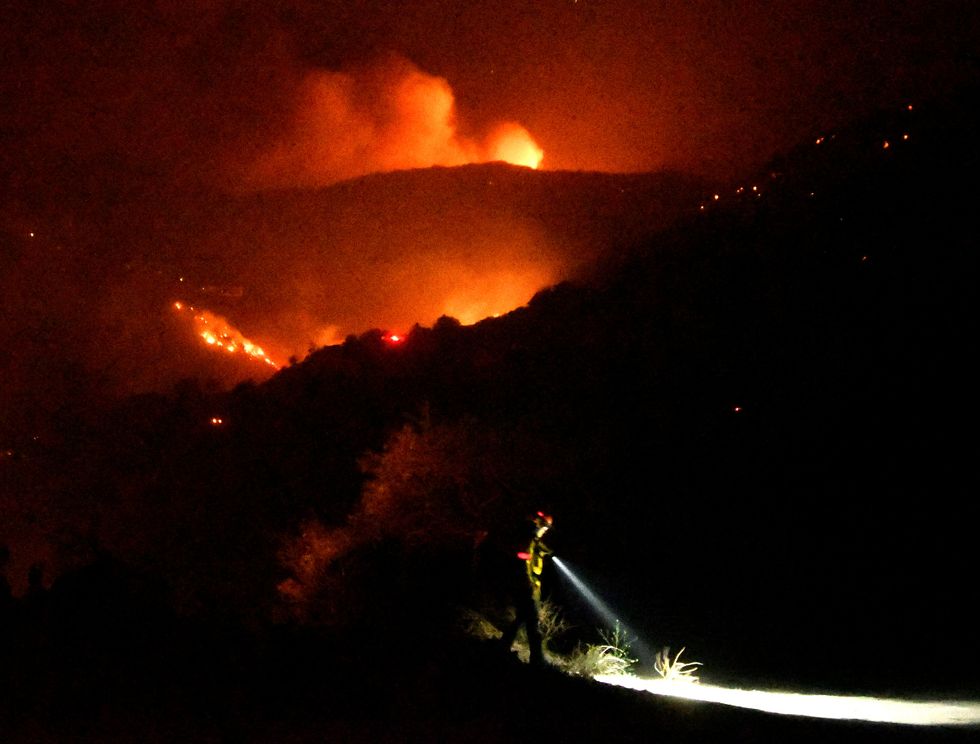 Firefighters keep watch on the Thomas wildfire in the hills and canyons outside Montecito, California, U.S., December 16, 2017. REUTERS/Gene Blevins

Lighter winds expected in California early this week should help firefighters in their battle against one of the largest and most destructive wildfires in the state's history, the National Weather Service has said.

By late on Sunday, more than 8,500 firefighters had contained about 45 percent of the fire in Southern California. Dubbed the Thomas fire, it began Dec. 4 and has scorched 270,000 acres (109,000 hectares) along the scenic Pacific Coast north of Los Angeles.

Its size is approaching that of the 2003 Cedar blaze in San Diego County, the largest wildfire in state history, which consumed 273,246 acres and caused 15 deaths.

While wind and low humidity will still create dangerous fire conditions, "improving weather conditions should allow firefighters to make progress on the fire" on Monday and Tuesday, the National Weather Service said on Twitter.

Officials said calmer winds also helped make Sunday one of their most productive days yet battling a blaze that has been fueled by fierce Santa Ana winds sweeping in from eastern California deserts.

"We're just hoping to make it home for Christmas," Bakersfield Fire Department Captain Tim Ortiz said Sunday at a recreation center in Santa Barbara serving as a staging area and base camp for more than 3,000 firefighters.

The fire has destroyed more than 1,000 structures and threatened 18,000 others. Centered less than 100 miles (160 km) northwest of downtown Los Angeles, it has forced more than 104,000 people to evacuate or seek shelter.

On Sunday firefighters paid their respects during a funeral procession for Cal Fire engineer Cory Iverson, 32, who died of smoke inhalation and burns on Thursday while battling the flames near the Ventura County community of Fillmore.

Firefighters lined spots along the procession route that ran from Ventura County to his home near San Diego.

So far it has cost $123.8 million to battle the Thomas fire, which has forced many schools and roads to close for days and created poor air quality throughout southern California.

Five of the 20 most destructive fires in recorded history have ravaged the state in 2017, according to Cal Fire. The cause of the Thomas fire remains under investigation.