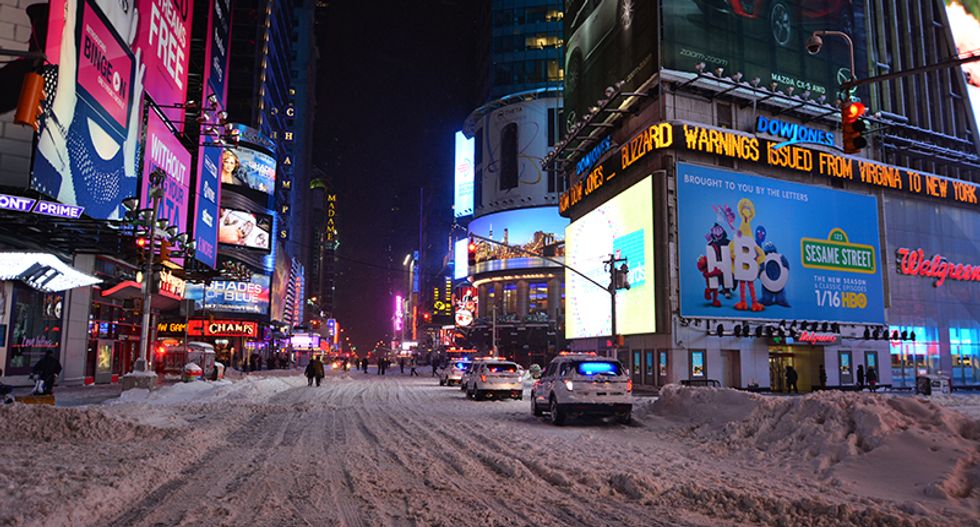 The torrent of arctic air that poured into many parts of the United States this week tightened its grip on Friday and brought record cold to some spots, as forecasters warned revelers from Memphis to Maine to expect numbing conditions on New Year's Eve.

As far south as Charleston, South Carolina, freezing rain coated the city's landmark church steeples, while a shroud of ice blanketed rock faces next to Niagara Falls as mist from the thundering falls on New York's border with Canada froze in the bitterly cold air.

For the second day in a row, North Dakota and northern Minnesota were among the coldest spots in the country on one of the coldest days of the year, prompting the National Weather Service to issue a winter chill advisory for the region.

Temperatures in northern North Dakota are expected to plunge to around -30 F (-34.4 C) on Saturday with a wind chill of about -50 F (-45.5 C), said Ken Simosko, a meteorologist with the weather service in North Dakota.

The hundreds of thousands of people heading to New York's Times Square for the New Year's Eve celebration on Sunday may witness the giant ball drop on the second-coldest evening on record for the night, forecasters say. Temperatures are expected to be at about 10 F (-12 C) or colder in midtown Manhattan, forecasters said.

"It's horrible," Veliz said, adding that she luckily does not have to work this weekend, when it is expected to snow.

In Memphis, the music hotspot known for its New Year's celebration featuring a countdown drop with an oversized guitar, temperatures are expected to be around 15 degrees Fahrenheit (-9.4 C), far below normal.

Maine Governor Paul LePage declared a state of emergency to allow heating oil truck drivers to work beyond the limit of hours set by federal transportation rules. While most U.S. homes are heated with natural gas, much of the northeast relies on heating oil that is delivered to homes by truck.

With temperatures in Boston forecast in the single digits for Sunday evening, a free ice skating show was canceled, an online schedule for the city's Boston First Night showed on Friday evening.

Canada has also issued extreme weather alerts and scaled back some of its New Year's Eve celebrations.

The cold weather pattern is expected to persist through the weekend, the NWS said, adding that a reinforcing shot of arctic air is currently taking shape over northwestern Canada.

On Friday, it issued winter storm warnings and advisories for an area stretching from Washington State, across the Midwest and into New York state.