Paul Manafort begged Jared Kushner not to fire him from campaign over secret Ukraine millions: report 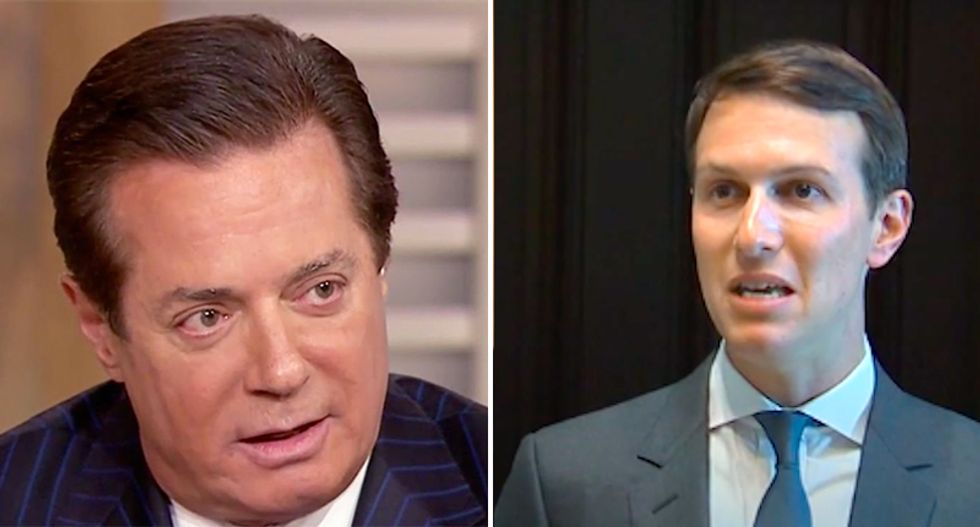 As more excerpts of Corey Lewandowski’s new book continue to leak, a picture is painted of Steve Bannon’s feud with Paul Manafort and the campaign chair begging for his job.

As Politico revealed Monday, Aug. 14 was Steve Bannon's first day at work with the Trump campaign. He'd met President Donald Trump and Manafort that weekend at the Bedminster golf course. Manafort reportedly appeared in boat shoes, which Bannon thought made him look like Thurston Howell III from “Gilligan’s Island.”

Manafort requested the company of Bannon, handing him a transcript from a New York Times story. After just three paragraphs, Lewandowski claimed Bannon looked up from the story, asking, “$12.7 million payment from Ukraine? How much of this is true?"

Manafort assured that it was all lies and his lawyers were fighting it.

“When are they going to run it?” Bannon asked. Manafort said The Times planned to publish the following day.

“Does Trump know about this?” Bannon asked.

Bannon argued someone should probably give him a heads up that his new campaign manager is about to be in the paper.

“It was a long time ago,” Manafort claimed. “I had expenses.”

Bannon actually understood that the explosive story in his hand would "at the very least ... leave a mark."

When the story ran the following day, Lewandowski claimed, Trump exclaimed “I’ve got a crook running my campaign.”

Trump wanted Bannon to fire Manafort that day, but Bannon cautioned that it would make a flood of bad press. He argued Trump should simply remove his authority and give him a new title. Kellyanne Conway was named as the campaign manager and Bannon was the new CEO. Manafort remained "chairman."

Just days later, Trump was about to take the stage at a North Carolina rally when a friend showed him an AP story that described Manafort as running “a covert Washington lobbying operation on behalf of Ukraine’s ruling political party, attempting to sway American public opinion in favor of the country’s pro-Russian government.” The AP story also revealed that Manafort and his deputy, Rick Gates, had “never disclosed their work as foreign agents as required under federal law.”

According to court documents, the two men are now under indictment by a federal grand jury on 12 counts: conspiracy against the U.S., conspiracy to launder money, unregistered agent of a foreign principal, false and misleading [Foreign Agents Registration Act] statements, false statements, and seven counts of failure to file reports of foreign bank and financial accounts.

Trump demanded son-in-law Jared Kushner fire Manafort. That following morning Manafort balked at the request to resign, concerned about the perception it was about the Ukraine stories.

“It will make me look guilty,” he said.

Kushner warned nothing could be done and a press release was going out any minute.

Trump defended Manafort just months ago, saying that Manafort's lawyer proved there was no collusion on the campaign. He then attacked former foreign policy advisor George Papadopoulos, who seems to have turned against Trump.

The Fake News is working overtime. As Paul Manaforts lawyer said, there was "no collusion" and events mentioned took place long before he...
— Donald J. Trump (@Donald J. Trump) 1509451781.0