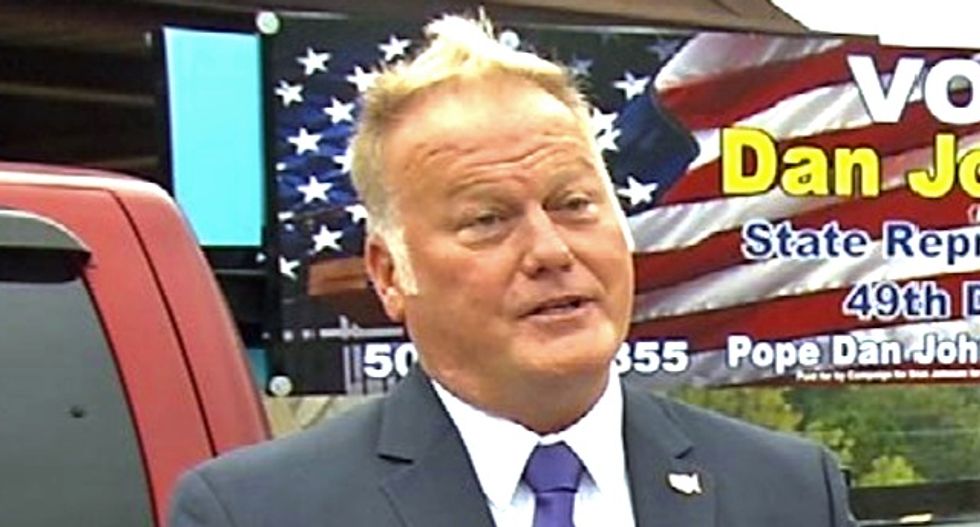 Dan Johnson -- the Kentucky state representative who committed suicide after being accused of molesting a 12-year-old girl -- claimed that he once raised a woman from the dead through prayer.

According to NBC News, the tall tale was one of many sensational stories Johnson told about himself, most of which have now been debunked.

Wednesday, Johnson was found dead in his vehicle of a single gunshot wound to the head. Police found him parked on a bridge in Ft. Washington, already deceased. Earlier this week, he was accused of molesting a 17-year-old girl on New Year's Eve, 2012, at a church where he was pastor.

He was exposed by a Louisville Public Media investigation that revealed an elaborate "web of lies" that Johnson had told about his past, including fabricated details of his purported ministry set up at Ground Zero after the 9/11 attacks.

"Johnson also boasted about being a White House chaplain for both Bush presidents and Bill Clinton, and professed to have been a peacemaker in Los Angeles during the 1992 Rodney King riots," said NBC. "KCIP found that Johnson’s claim that he had brought a dead woman back to life while serving as a missionary in South America was based on a letter written by another preacher who admitted he hadn’t seen the supposed miracle and only heard about it."

Johnson held a defiant press conference at which he refused to resign, saying the charges against him are false. He left a rambling message on Facebook, then took his own life.

Johnson's widow Rebecca Johnson maintains that her husband is innocent and that the charges against him were a "high tech lynching" and said she intends to run for his seat in the state house of representatives.

Other lies Johnson told included claims that he earned a “doctorate of divinity” from a bible school in Des Moines, IA; that the Ku Klux Klan burned down his church in 2000 -- he was later charged with arson -- and details from his recounting of the 9/11 attacks that do not stand up to scrutiny.

For instance, Johnson said that he watched the 9/11 attacks from "a mile away" in a room at "The New Yorker Hotel." The Wyndham New Yorker Hotel is actually in midtown Manhattan, 3 miles north and out of the line of sight of where the World Trade Center stood.