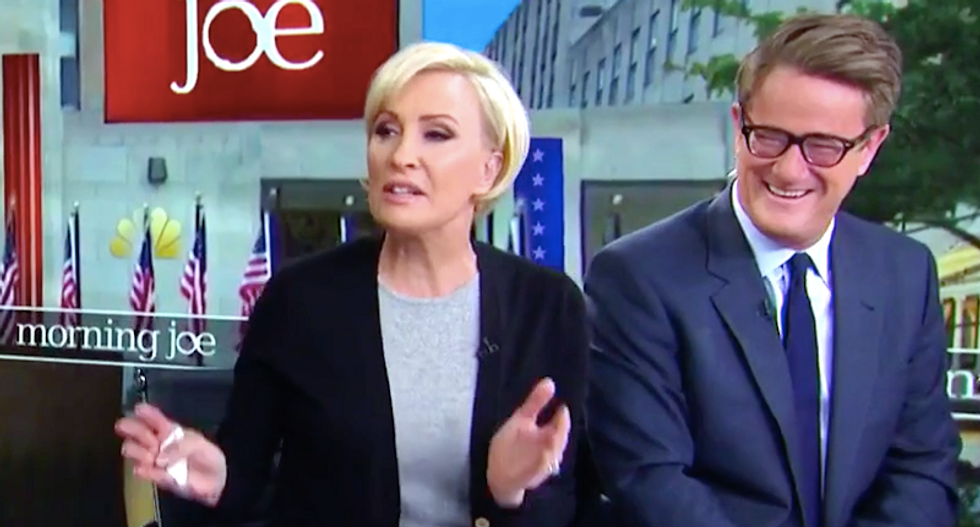 MSNBC host Mika Brzezinski was blasted by victims after coming to the defense of Mike Halperin, who has been accused of sexual misconduct by a dozen women.

One victim, Emily Miller, told CNN she was "so upset" by Brzenzinski's comments that she was "shaking."

On Friday, the MSNBC host complained that women where were sexually harassed by Halperin did not want to meet with the disgraced political pundit.

"I can't retraumatize myself to be in the same room with him to please Mika Brzezinski and her rich and famous friends," Miller explained. "If Halperin genuinely wanted to apologize, he could send a letter or put it in public domain. Instead he has on the record denied my accusations which is extremely painful as a victim to be denied the truth."

"It is disgusting and unethical of Mika to use the power of her show to shame me, a sexual assault victim, into meeting with the man who did that to me," Miller charged.

"She did invite me to go on the show with him so she could mediate and it had to be an exclusive. Basically she wants the ratings and Jerry Springer," Miller continued. "And seemingly she now wants to help her rich powerful friend get back into power."

"In the case of Mark, my goal today was to start a conversation about hearing from the men whenever we can, but I realize that it is not my place. It isn't my call to make, and for that I am truly sorry," Brzezinski said in a statement.

"It's wrong [to say] that we were offered a serious chance to meet with him," said Lara Setrakian, another Halperin accuser. "And the whole decision making around what should come next begins with him being an adult and begins with him speaking as an adult not through a proxy."

Press Forward, an organization started to reform newsrooms, issued a statement attributed to ten victims of Mark Halperin, including Miller and Setrakian. Dianna Pierce Burgess, Katie Glenn, Dianna May and Ella Spektor McManus were also publicly identified as having signed the letter.

"As journalists and as victims of sexual assault we vehemently disagree with Mika Brzezinski’s inappropriate comments on MSNBC's "Morning Joe" today," the victims wrote. "Sexual harassment and assault is illegal in the workplace, and represents a violation of the policies and standards of NBC News. It is an unethical and harmful request to ask that sexual assault victims confront their accusers in person."

"Ms. Brezinski and her cohost, Joe Scarborough, have a long-standing personal friendship with Mark Halperin which appears to be shaping their position on his case," the victims continued. "MSNBC’s air time should not be used as a platform for the one-sided rehabilitation of Mr. Halperin’s reputation or career."

Prominent literary figures including Paul Auster and Gay Talese gathered in Manhattan on Friday for a reading of Salman Rushdie's works, in solidarity with the author seriously injured in a stabbing attack.

More than a dozen acclaimed writers, including friends and colleagues of Rushdie, spoke at the steps of the New York Public Library for the event, which organizers said the novelist had been invited to watch from the hospital.

Byrne filed a motion Thursday seeking the unsealing of an affidavit supporting the FBI search of Mar-a-Lago, and in the filing the former Overstock CEO claimed the former president on Dec. 18, 2020, verbally authorized Powell to investigate conspiracy theories about election fraud.