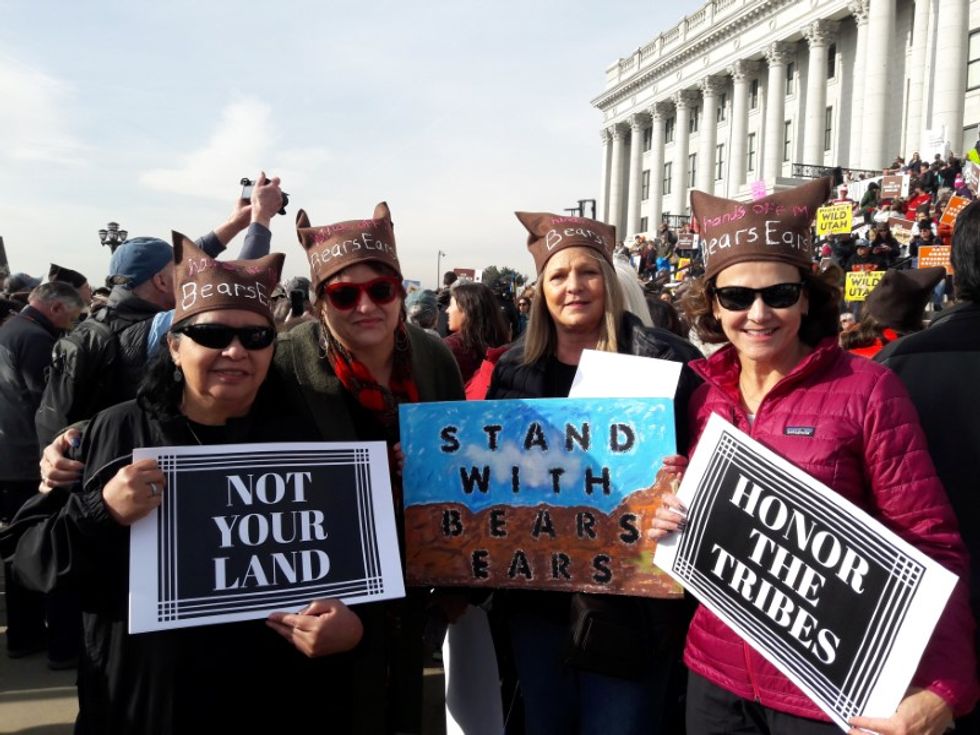 Protesters wear brown Òbears earsÓ hats on Saturday December 2, 2017 at a rally in Salt Lake City, Utah, U.S. , against plans by President Donald Trump to shrink the size of two national monuments areas in the state, which would open them up for development including mining and drilling. REUTERS/Emily Means

More than 5,000 people rallied on the steps of the Utah State Capitol on Saturday afternoon to protest U.S. President Donald Trump's expected shrinking of two national monument areas in the state.

Trump is expected to visit Utah on Monday and announce cutting the size of Bears Ears National Monument and the Grand Staircase-Escalante National Monument, where drilling and mining are banned.

Trump has argued previous administrations abused their right to designate monuments under the Antiquities Act of 1906 and put millions of acres, mainly in western states, off limits to drilling, mining, logging and ranching without adequate input from locals.

There was no sign of counter-protesters supporting Trump on the monuments issue on Saturday in Salt Lake City. There was a rally in rural Monticello, Utah, near Bears Ears, that included state and local politicians who supported Trump's plans.

"We have a beautiful state, and we should leave the open lands alone," Johnson said.

Local and state Democratic politicians spoke at the rally, which also included Ethel Branch, attorney general for the Navajo Nation.

"We need places like Bears Ears where the land remains largely untouched ... because that affects the potency of our prayers and our ceremonies," said Branch.

Senator Orrin Hatch of Utah said last month that Trump would reduce the size of the two monuments.

Trump has pushed to roll back regulations that prevent development and ordered a review of 27 monuments with cultural, historical or scientific importance.

"No matter what happens on Monday, we will defend Bears Ears together," Branch said.

The announcement is expected to spark legal battles with environmental groups and Native American tribes.