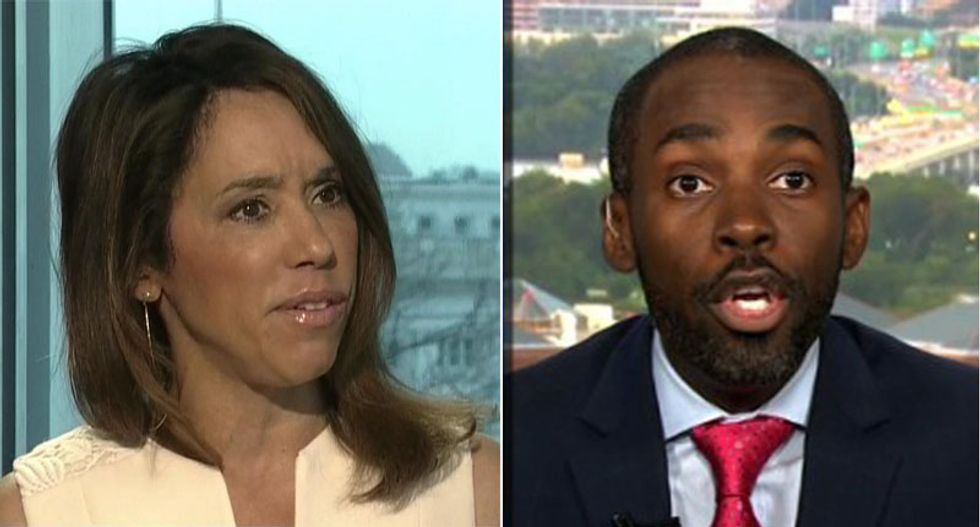 In a look at the lives at African Americans who are tasked with defending the polices of President Donald Trump, several prominent black conservatives admitted that life is not easy as they are  treated as a "novelty" by the Republican Party and conservative organizations that are unsure how to use them.

In an interview with the Daily Caller, cable TV regular Crystal Wright -- who blogs under the name "Conservative Black Chick" -- explained that her dealings with fellow white conservatives can be awkward, saying she is considered a "novelty" to be trotted out for fundraisers.

Wright added that she doesn't approve of how the Democratic Party uses the black community, but also admitted that the GOP is "tone deaf" on race and still passes over conservative blacks who could help reach out to their community.

“The party just doesn’t cast the net wide enough. You can find plenty of black conservatives who are highly qualified and would love to work within these organizations and on the Hill and they’re not even considered,” Wright explained to the Caller. “And I’m not talking about hiring a black person to work on black issues. That is just so insulting.”

Pastor Demetrius Minor, who interned in President George W. Bush's White House, has written that it is not easy being a black conservative, writing: "When I saw the reassertion of the Ku Klux Klan and white nationalism into the campaign cycle, in the year 2016, I’d realized that a painful past that I had previously tried to ignore, was resurfacing. My conservative friends, who are good people with big hearts, would dismiss it as media bias or the left playing the race card, but I saw friends of mine who were people color become truly terrified at what was taking place before their eyes."

Speaking with the Caller, he expanded on his anxiety, saying, “A lot of the times in talking with white conservatives – and I want to be careful here and not paint everybody with the same brush – but they may have a perception of the black community, that is due to their lack of knowledge.”

The Caller states that Minor added, "it doesn’t mean that these white conservatives are racist or evil, but may not have experienced different cultural backgrounds."

High profile CNN contributor Paris Dennard explained that he gets a tremendous amount of push-back from the black community, while admitting that he doesn't necessarily agree with conservatives who believe racism is non-existent.

“For those who do question my blackness, this is the reality of it: at the end of the day I am still a black man in America. I am acutely aware of that. There are pockets of this country where I have or may be discriminated against. It is what it is,” former White House Director of Black Outreach during the Bush administration stated. “I know the impact of certain policies on our community. I have experienced racism, I get it.”

You can read the full interviews here.