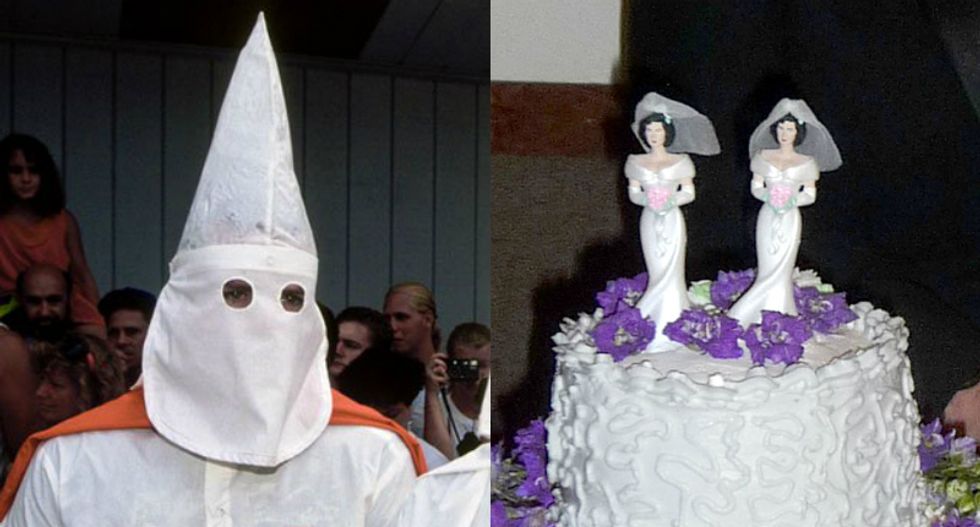 In the circus surrounding the Masterpiece Bakeshop case, in which a Colorado baker refused to serve gay customers, lost a discrimination case and then appealed it all the way to the Supreme Court, a strange tidbit emerged yesterday. In explaining why Jack Phillips, the bakery's owner, should not be compelled to serve people whose lifestyles go against his religious beliefs, Solicitor General Noel Francisco kept saying that a black sculptor should not be compelled to make art for the Ku Klux Klan.

As Imani Gandy at Rewire pointed out Wednesday, Francisco, who serves as the government's lawyer, got at least one half of his argument right -- no lawyer could successfully argue that it's discriminatory for an African-American artist to deny service to a KKK member. But that's because, unlike LGBTQ people, KKK members are not members of a "protected class."

"The anti-discrimination law doesn’t require every business to serve every person on the planet," Gandy wrote. "It merely requires that a business not refuse service based on a person’s protected characteristic."

Under Colorado's anti-discrimination law, "places of public accommodation” like businesses, restaurants, stores and hotels are not permitted to refuse service to someone based on protected characteristics. Those characteristics include "disability, race, creed, color, sex, sexual orientation, marital status, national origin and ancestry."

"A protected or 'suspect' class," she continued, "is made up of 'discrete and insular minorities': a group of people who have historically been subjected to discrimination, comprise a discrete minority (meaning there aren’t a lot of them, percentage-wise), and have immutable characteristics (meaning characteristics that cannot be changed)."

Being a member of the Klan or other bigoted groups is not unchangeable, nor does it subject one to historic discrimination (no matter what racist right-wingers would have you believe).