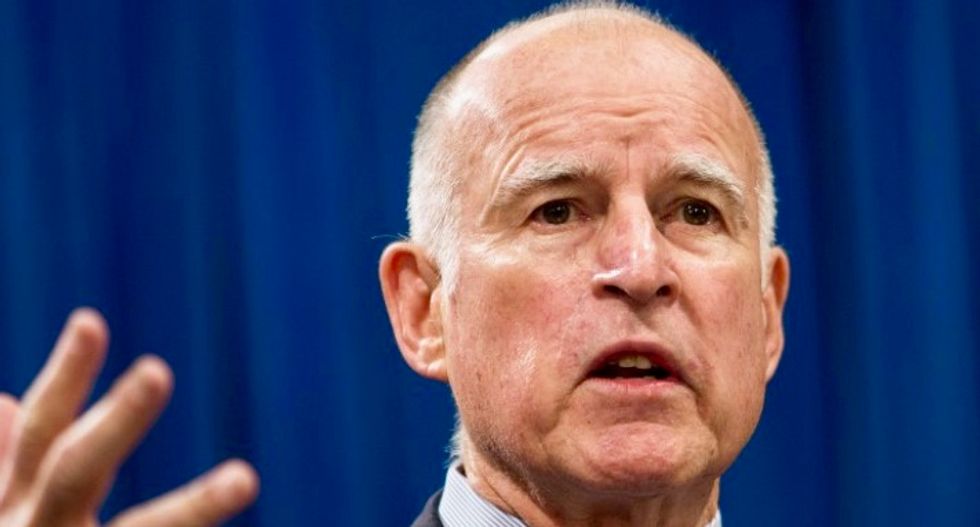 California Governor Jerry Brown on Thursday delivered his 16th and final State of the State address, jabbing at U.S. President Donald Trump while noting his own success rebuilding the budget, boosting education and fighting climate change.

Spry and vigorous, three months short of his 80th birthday, the Democrat promised to use his final year in office to continue advancing policies that have positioned the state as a counterweight to the populist conservatism of Trump and the Republican-dominated U.S. Congress.

"Our world, our way of life, our system of governance - all are at immediate and genuine risk," Brown told state lawmakers, referring to Trump's environmental policies, his rhetoric over North Korea's nuclear program and other issues.

"Despite what is widely believed by some people in Washington, the science of climate change is not in doubt," Brown said. "All nations agree except one, and that is solely because of one man, our President."

Brown has taken the helm of the state four times in his long career, once during the tumultuous 1970s and more recently for two terms beginning in 2011. In between, he served as Attorney General and mayor of Oakland.

California’s fiscal position has improved dramatically since 2011, when the state suffered a $27 billion budget gap. By contrast, during Brown's final budget address earlier this month, he proposed to add more than $5 billion to the state's rainy day fund to better prepare for a future economic downturn.

Brown said California "has led the way" in strides to fight climate change, such as passing new appliance standards, incentives for fuel-efficient vehicles, and the country's only functioning cap-and-trade market.

He made it clear he did not plan to spend his last year as a lame duck, instead promising to set up a task force to find ways to avoid and recover from wildfires that have devastated the state, and continue building controversial projects like a high speed rail line through the state's Central Valley breadbasket.

Republican assemblyman Brian Dahle said he was pleased the governor had balanced the budget but opposed the high speed rail project and a recent increase in gasoline taxes. He said the state was too expensive, and the budget only improved because of higher taxes.