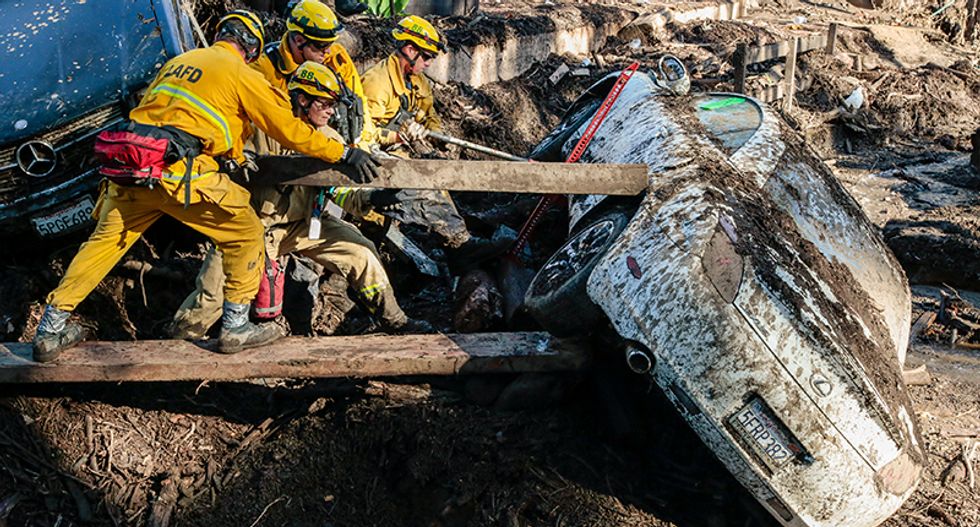 Rescue workers search in an around cars for missing persons after a mudslide in Montecito, California, U.S. January 12, 2018. REUTERS/ Kyle Grillot

The San Ysidro Ranch, a five-star resort near Santa Barbara where President John F. Kennedy and his wife Jacqueline honeymooned, has been severley damaged by the deadly mudslides in Southern California this week.

Officials have yet to fully assess the damage at the ranch, which sits on 500 acres in the foothills of the Los Padres National Forest.

Triggered by heavy rains, the massive mudslides in southern California struck before dawn on Tuesday this week, killing at least 18 people.

Mud and debris cascaded down hillsides that had been stripped of trees and shrubs last month by wildfires, including the Thomas Fire, the largest blaze in the state's history.

After surviving the fire, the ranch was not so lucky during the mudslides.

"It looks like a war zone. It looks like the place just got bombed," U.S. Congressman Salud Carbajal, a Democrat representing Santa Barbara County, told Reuters while visiting the site on Friday.

The resort was not accepting reservations until at least August, according to Cheyanna Rudd, a booking agent for an outside company used by San Ysidro, but Maxine Rutledge, the resort manager, disputed the timeline.

She declined to provide further details on when the property would reopen and said owner Ty Warner, the "Beanie Babies" billionaire who bought the place in 2000, did not have an immediate comment.

Franciscan monks stayed on the property in the late 1700s and it served as a citrus ranch in the 1800s before opening to guests in 1893, according to a history on the ranch's website.

The Academy awarding-winning actor Ronald Colman took over the ranch in the 1930s and it became a haunt of Hollywood stars from Audrey Hepburn to Groucho Marx.

Actors Vivien Leigh and Laurence Olivier married there and John F. Kennedy and his wife Jacqueline honeymooned there before he became U.S. president.

Resort employees were evacuated ahead of the mudslides and Rutledge said it will be at least one or two weeks until staff can return.

The water and mud overflowed a creek behind the resort's cottages and ravaged a residential area of Montecito on its way to the beach, Santa Barbara County fire spokesman Mike Eliason told Reuters on Friday.

The resort had avoided major damage during the Thomas Fire last month as firefighters stopped the fire several hundred yards away, Eliason said, but the ranch has been closed to guests since before Christmas.

MSNBC's Joe Scarborough unloaded on Rep. Marjorie Taylor Greene (R-GA) for endorsing violence against the lawmakers she's been elected to serve alongside.

The newly elected Georgia Republican has already endorsed the QAnon conspiracy theory, and past Facebook posts have surfaced showing that she supported the execution of former president Barack Obama and House Speaker Nancy Pelosi as recently as 2019 -- and the "Morning Joe" host said it's always been clear she poses a threat to her colleagues.