'Do we all have to die because your penis is small?': Colbert offers a perfect solution for Trump's 'Button Dysfunction' 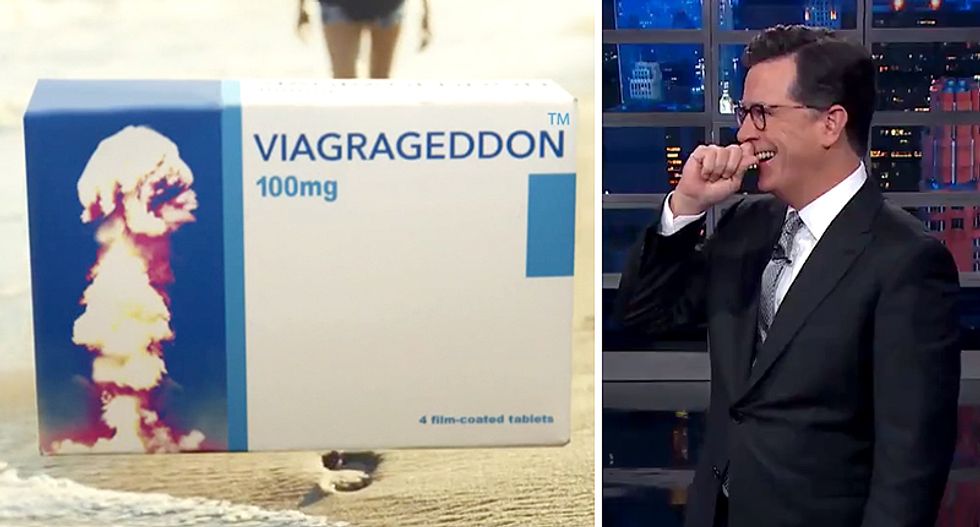 Over twenty-four hours and 30,000 headlines ago, Trump shocked the world by casually firing off a threat to Jong-un, effectively escalating tensions with the notoriously volatile leader.

“So guys, it’s just you and your button, and the mood is right for total annihilation,” a woman in the ad says. “But then, Button Dysfunction gets in the way. You know what? Plenty of world leaders have this problem. Thankfully, there’s Viagrageddon.”

“Viagrageddon helps leaders with BD increase the size of their buttons so they can feel big and important,” the woman explains.

A voiceover warns users should not take the drug if they are “sane or cherish life,” adding, “side effects include nuclear winter, subterranean mole people and using human teeth as currency in the afterscape.”

“Viagrageddon: do we all have to die because your penis is small?” the tagline reads.

Later in his monologue, Colbert pointed out that Trump’s “nuclear button” tweet didn’t even correspond to the correct male anatomy, informing the president that he should be concerned instead about the size of his missile.

“I don’t know if he knows this, traditionally buttons are kind of a lady part,” Colbert said. “As in: I don’t think the president knows where to find the button.”

The host later implored Barack Obama to “go on national TV and say Trump's penis is bigger than yours,” arguing that no one would believe it and it would help assuage the president’s insecurities.

Watch the ad below, via CBS: