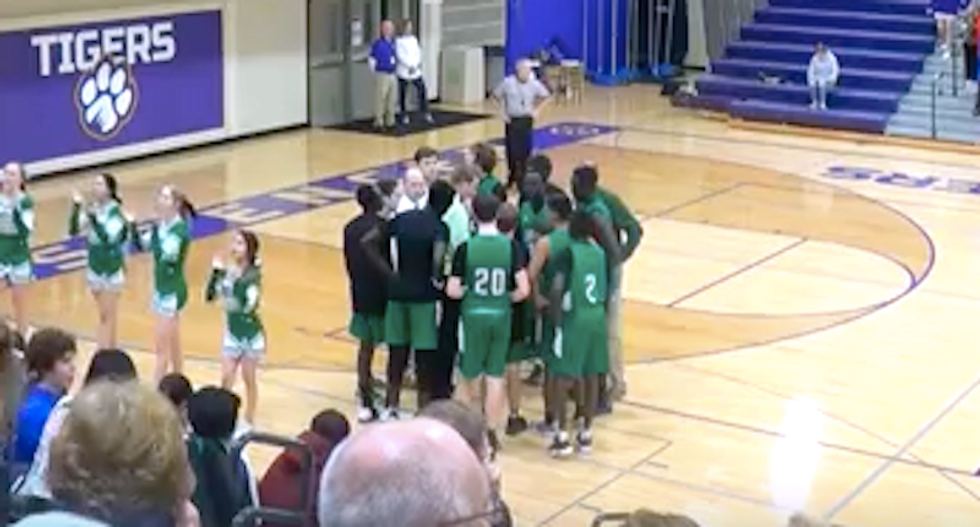 The Storm Lake Tornadoes visited the Spencer Tigers on Jan. 19 for a game, and students from the mostly white host school jeered their out-of-town rivals with racist taunts, reported the Globe Gazette.

White students chanted "USA, USA" at Tornadoes players, along with "lock your car doors" and jingled keys, which officials from both schools confirmed was in apparent reference to a Storm Lake student being accused last year of stealing a car.

The Spencer school district has about 1,900 students and is predominantly white, while the Storm Lake district has more than 2,400 students, of whom 84 percent are non-white.

"We’re different than other communities in northwest Iowa and most communities in Iowa," Storm Lake Superintendent Carl Turner told the Des Moines Register. "Because we’re different, people jump to conclusions about us, but all I ask people is give us a chance before you pass judgment."

The schools have an intense sports rivalry, and Spencer fans yelled "go back to where you came from" last year after a football game.

School officials tried to address the situation by allowing students from each school to spend a day visiting the other building and classes.

Storm Lake Principal Beau Ruleaux said he learned of the chants the following day, when he received texts about "some ugly situations" at Spencer.

“Some slurs seemed to be happening randomly during and after the game, probably involving only a few people,” Ruleaux said.

Some Spencer students wore patriotic clothing as part of a "USA Night" event at the game, but the theme wasn't endorsed by school officials and only about 10 percent of the students there wore flag-themed attire.

“I’ve know the Spencer High School principal for years, and I know she felt horrible about what happened," Ruleaux said. "We’ll keep moving forward. We want to keep the spirit of this rivalry — there’s nothing wrong with a sports rivalry as long as we make sure there is respect too, and that we’re not displaying hatred."

Storm Lake students complained that Spencer staffers took no action during the game.

“This is not to say that we’re always innocent," Ruleaux said. "People get heated during rivalries, and we don’t always know what is going on in the kids’ world with social media going back and forth."

The superintendent of Spencer Community Schools said students had received unspecified disciplinary action for the incident.

"We don't condone poor sportsmanship," said superintendent Terry Hemann. "Now, this becomes a teaching opportunity and a learning opportunity, for our community, and, most important, for our students."