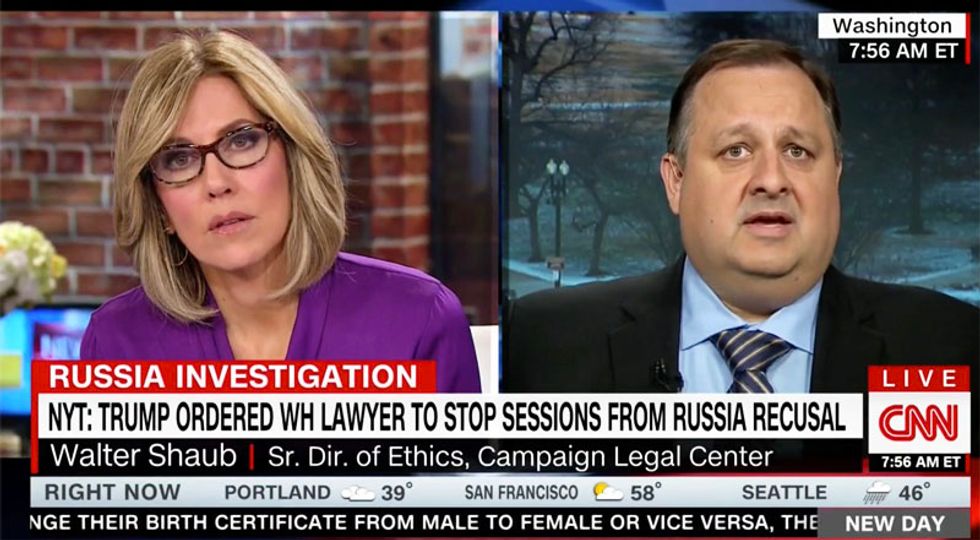 Appearing on CNN with host Alisyn Camerota, the former director of the United States Office of Government Ethics all but called White House attorney Don McGahn a Nazi for trying -- at President Donald Trump's request -- to convince Attorney General Jeff Sessions to not recuse himself in the probe into Russian election interference.

Speaking with the CNN host, Walter Shaub admitted that he had previously said he was furious about the report from the New York Times that stated, "President Trump gave firm instructions in March to" McGahn to stop Sessions from stepping aside -- a move that ultimately failed.

"Of all the stories we reported this one gets you the most infuriated. Why is that?" Camerota asked.

"Maybe it's because I'm close to it, and after reading this story..." Shaub replied before trailing off. "He [McGahn] drove the Federal Election Commission into a ditch to undermine our election laws and he did a direct assault on the ethics program and now we are learning he attacked the Department of Justice."

"While I was on the phone talking to Department of Justice officials, telling them Jeff Sessions had no choice but to recuse himself in order to resolve a criminal conflict of interest, we learned Don McGahn was pressuring Sessions to do just the opposite, participate in that investigation," he explained.

"He can try and hide behind the 'I was only following orders,' but that didn't work at Nuremberg and it's not going to work here," he said referencing the prosecution of Nazi officials for war crimes following the Second World War.

"As an attorney, the president is not his client," Shaub continued. "The office of the president is his client and he's ultimately answerable to the American people. I don't have words I can use on TV this morning to describe how angry I am to learn this."

"You are using strong words," Camerota pressed. "You are saying that you think that the chief attorney for the White House is the president's puppet?"

"Yeah, and I don't mean to liken it to Nuremberg" Shaub stated backing off his comparison to Nazi Germany. "I am just saying that excuse didn't work and we have established that. It's a crime for a federal employee to participate in a particular matter in which he has a financial interests and Jeff Sessions was a member of the Trump campaign who spoke with Russian officials in 2016 in one capacity or another and he did not reveal that in his congressional testimony under oath. So he was certainly a potential subject of any investigation into the Trump campaign's communications with Russian officials, and he knew that, which is why he did do the right thing and recused himself."

"I can't talk details about individuals or time because I am limiting myself to what is already publicly known and I revealed that I gave this advice to DOJ, but I can share I felt the DOJ officials were rattled, and I couldn't figure out why," Shaub recalled. "And it turns out, Don McGann was leaning on them to recuse, and that fills in the missing piece."

"Do you think it's obstruction of justice?" Camerota asked.

"I don't like to say for sure a crime has been committed because we don't know all the facts yet, but at this point it would be irresponsible not to look into it," he advised. "And the members of Congress who are actively trying to undermine the Mueller investigation really need to back off if they care about their country."