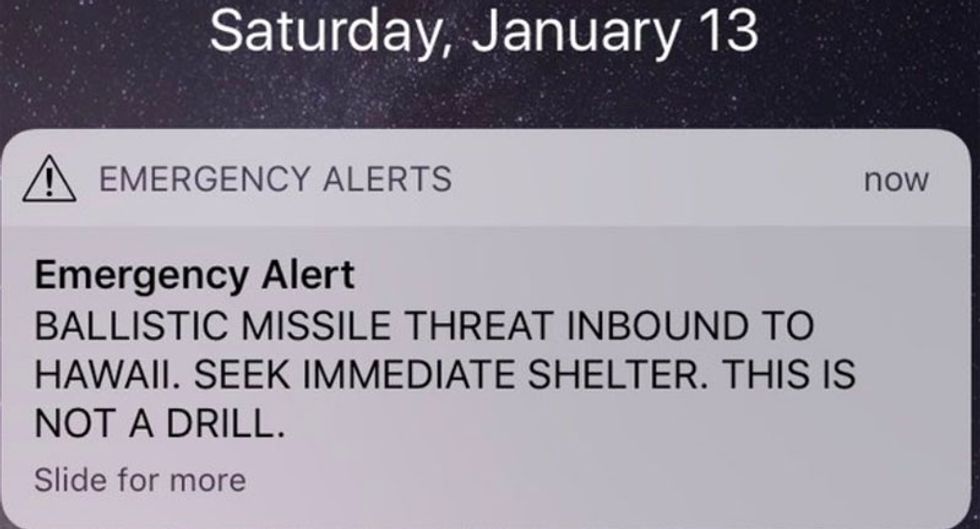 The state warning officer who accidentally sent a bogus alert about a missile attack on Hawaii has received dozens of death threats, according to his supervisor.

Toby Clairmont, executive director of the Hawaii Emergency Management Agency, said police are investigating threats made against the employee and his family, reported the Honolulu Star Advertiser.

The man hasn't been publicly identified, but Clairmont said he was a 10-year veteran and, like the other 10 state warning officers, is a non-union, exempt employee.

The employee has been reassigned to another position that will keep him away from the warning alert process, and Clairmont said the man was beside himself over his mistake.

“This is hard," Clairmont said. "What can be worse than this? Running over a child in a crosswalk and you realize you did it? It’s that kind of feeling."

"This employee is not doing well," he added. "We need to help them, too.”

Clairmont said he understands why the public was upset, and he said the employee could face reprimand or even termination over the mistake.

“Somebody called me on the phone and said, ‘Toby you’ve got to shoot someone,’” Clairmont said. “This person is distraught that they’ve received death threats."

He explained that four people were present in the emergency operations center, including a supervisor coming on duty.

“It’s not as easy saying it was one person doing this,” Clairmont said. “It would be very unjust to put our finger on one person."

The mistake, which was not corrected for 38 minutes, remains under investigation.

"There were at least four people in the room at the time, including a supervisor and three warning officers," Clairmont said. "That’s what leads us to believe it’s not as simple as people think. Maybe something was said in the room that was misinterpreted. Maybe there were too many people in the room.”

But he said only one warning office "clicked the button" that sent the missile warning.

“There was one individual, a very well-trained and seasoned employee," he said. "He’s not someone we hired off the street. This was someone we could depend on. There had to be more to it.”