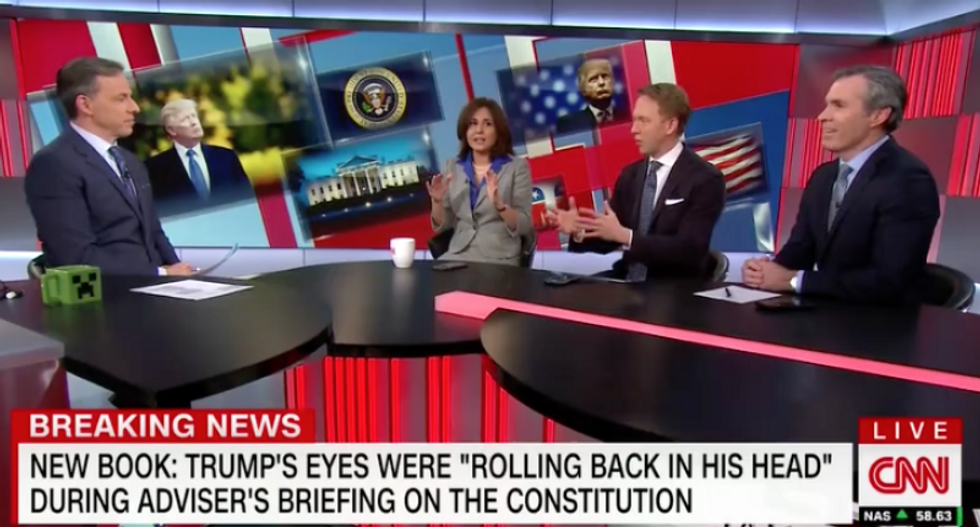 Of the many revelations from Michael Wolff's Fire and Fury: Inside the Trump White House, one stuck out to CNN panelists on Wednesday afternoon: that President Donald Trump reportedly does not read.

"Here, arguably, was the central issue of the Trump presidency, informing every aspect of Trumpian policy and leadership," Wolff wrote. "He didn’t process information in any conventional sense. He didn’t read. He didn’t really even skim. Some believed that for all practical purposes he was no more than semi-­literate."

According to Kevin Madden, a Republican CNN political commentator, "all of that comports with what we've heard previously."

"He's not somebody who ran as a policy expert," Madden said — at which point host Jake Tapper cut him off.

"You're putting a nice spin on it, Kevin," Tapper said. "He doesn't read!"

"What I'm saying is he's not an intellectually curious person," Madden said, but Tapper wouldn't let up.

"You're being nice about it!" the host quipped.

The GOP commentator tried to say "we knew that," at which point Tapper and Center for American Progress president Neera Tanden objected.

"A short one-pager is different from like, 'I don't read the briefings that I get every morning from the CIA,'" Tanden concluded.