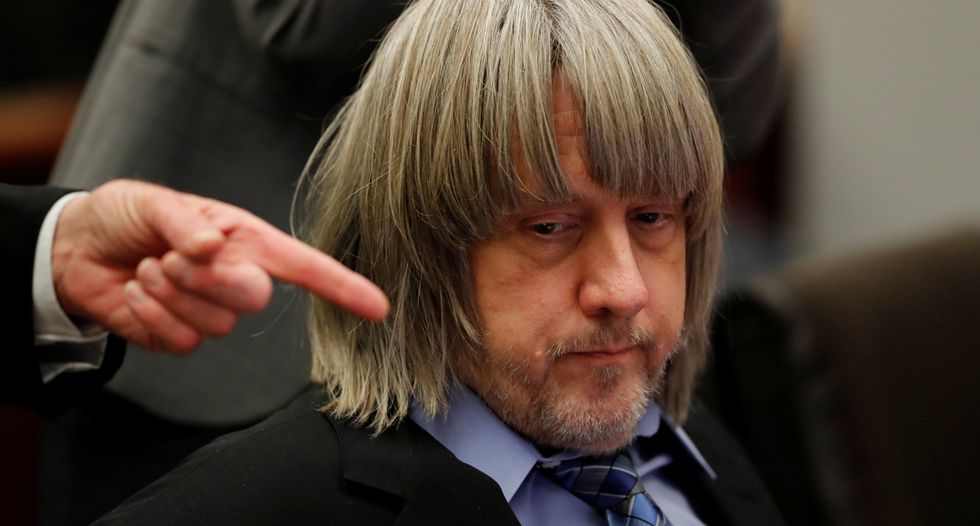 David Turpin listens to his lawyer as he appears with his wife (not shown) in court in Riverside, California, U.S. January 24, 2018. REUTERS/Mike Blake

RIVERSIDE, Calif. (Reuters) - A judge on Wednesday barred a Southern California husband and wife from contacting the 13 children they are charged with beating, shackling and starving in their suburban home, a ruling the couple's attorney did not oppose.

The judge imposed the restrictions on David Turpin, 57, and his wife Louise, 49, during a brief hearing in a grim case that has drawn worldwide media attention and calls for better oversight of home-schooled children.

The parents are accused of keeping their 13 children, ages 2 to 29, in filthy and fetid conditions, chaining some to their beds and using starvation as a weapon to control them. Each parent faces 94 years to life in prison if convicted on more than two dozen charges, including torture, child abuse and false imprisonment.

The couple were at Wednesday's court hearing, handcuffed and shackled to their chairs.

"You must not harass, strike, threaten, assault, follow, stalk, molest, destroy or damage property of or disturb the peace of, keep under surveillance or block the entrance of the people listed in the order," Riverside County District Judge Emma Smith told the defendants.

"You must not try to get their addresses or locations and must have no electronic, telephone or written communication. You must not contact them except through your lawyer. You can’t use a third party other than your lawyer, including an investigator,” Smith said.

The Turpins were arrested on Jan. 14 after their malnourished 17-year-old daughter climbed out a window of the family home in Perris, about 70 miles (110 km) east of Los Angeles and called the 911 emergency number on a cellphone.

The protective order was sought by Riverside County prosecutors and was not opposed by defense attorneys.

"It protects everyone involved, including my client," attorney Dave Macher, who represents David Turpin, said of the order. "I don’t want to expose him to accusations that he harassed, tampered with or attempted to persuade a witness not to testify or to get them to change their testimony. We want to avoid that."

A lawyer for Louise Turpin declined to comment to reporters outside court.

Neither one of the defendants spoke during the hearing.

Prosecutors have called the case an example of “human depravity,” saying the children were denied food, basic hygiene and medical care and were punished for perceived infractions such as washing their hands above the wrist.