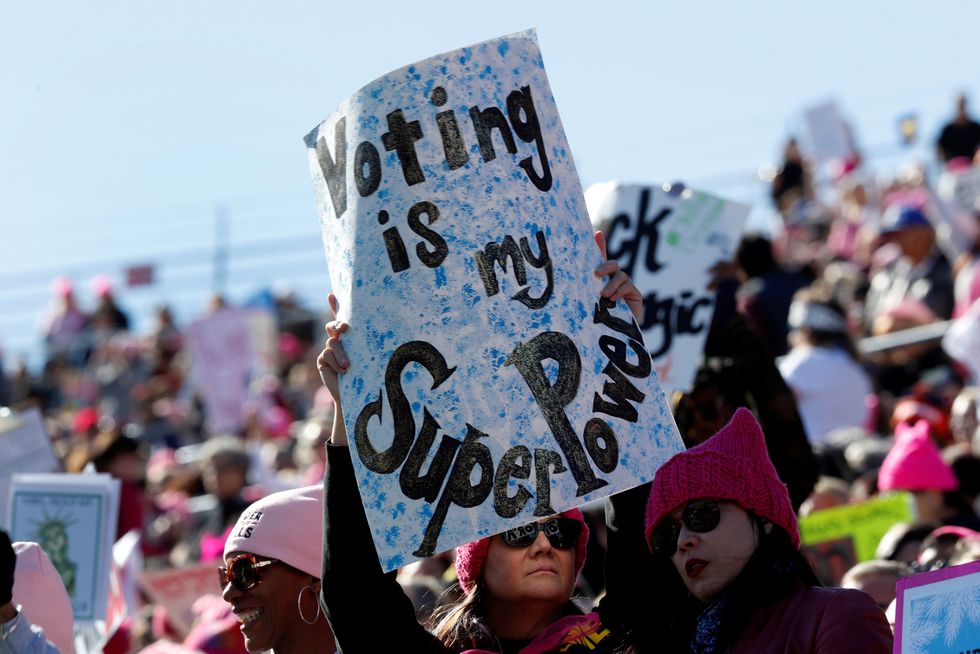 A woman holds up a sign during the Women's March rally in Las Vegas, Nevada, U.S. January 21, 2018. REUTERS/Steve Marcus

Thousands of protesters gathered for the Women's March "Power to the Polls" rally in Las Vegas on Sunday, kicking off a national drive to register a million new voters as well as put more female candidates in office and stymie President Donald Trump's agenda.

The march came a day after hundreds of thousands of women and male supporters took to the streets of New York, Washington and other cities for a series of Women's March protests that marked the first anniversary of Trump's inauguration.

The mass demonstrations, while drawing fewer attendees than the millions of people who marched last year, suggested that the anger felt by many women after Trump's surprise election was still palpable.

“When our country was in free fall, the Women’s March got us out of our despair and out of our homes and into the streets,” said Cecile Richards, president of Planned Parenthood and a key speaker at the rally. “And ever since that day, women have been shaking the foundation of America.”

Connie Whittig, a 73-year-old Milwaukee resident, came to the rally with her sister, Ann Pesch, a year after they attended the march in Washington.

"Our voices haven't been heard, and now it's time. We can't be silent anymore," Whittig said. "We're still second-class citizens."

Marches were also held on Sunday in U.S. cities ranging from Miami to Knoxville as well as in London and Paris.

March organizers said they designated Las Vegas as the site of the main event because of its status as a key political swing state, as well as to honor the victims of the mass shooting that killed 58 people and left more than 850 injured in October.

“We want to let people to know Vegas is strong, and that’s really why they chose this place,” said Chris Giunchigliani, a Clark County commissioner and a Democratic candidate for Nevada governor. "It’s not only about empowering women and diversity."

The event, held in a 40,000-seat football stadium, took on a festive atmosphere on a warm Sunday morning.

Dozens of volunteers fanned out looking to register people to vote among the thousands in attendance, as representatives of progressive Democratic candidates passed out literature.

Sarah Casey and Leslie Morgan, both of Las Vegas, registered to vote at the stadium.

"It's partly about not liking Trump, but it's also the GOP and how they're just playing dirty politics," Morgan said, referring to the Republicans. "It's also all the things he's rolling back that Obama did. Anything to do with the environment and anything to do with immigrants."