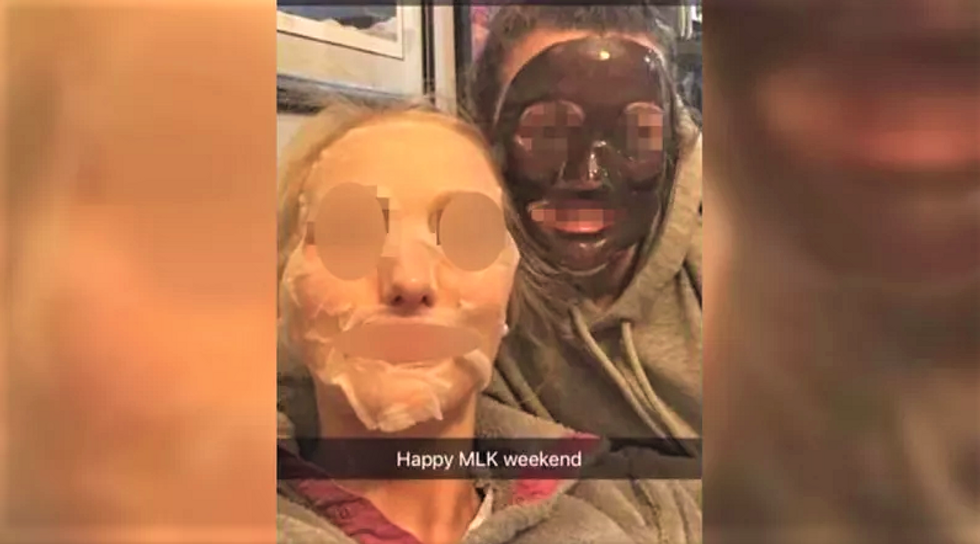 A Snapchat photo featuring a girl in a spa face mask that reads, 'Happy MLK weekend.'

A South Carolina mother has accused a student at her daughter's high school of cyberbullying, all because he shared a racist photo that her daughter posted on SnapChat.

Local news station Live 5 News reports that James Island Charter High School student Rick Wilson recently noticed a photo on his Snapchat feed that featured two of his fellow students in spa masks -- one in white and another in brown -- along with the caption, "Happy MLK weekend."

"At first when I saw it, I was like it's just a face mask," Wilson explained to Live 5 News. "I clicked it and I looked and I saw 'Happy Martin Luther King Weekend,' and I was like well that has to have a hidden meaning behind it."

Wilson then decided to share the photo -- along with another photo shared by students at the school that featured a Confederate flag along with derogatory statements about black people -- with his friends to call out his classmates' racism.

Both of the girls in the spa mask issued a formal apology for the photo, which they acknowledged that many people found tasteless and offensive.

Despite this, the mother of one of the girls has decided to file a police report for cyberbullying against Wilson for bringing attention to the photo.

James Island Charter High School issued a statement urging students to be more careful about the photos they share, while adding that the photo in question "intentionally or not offended many people."