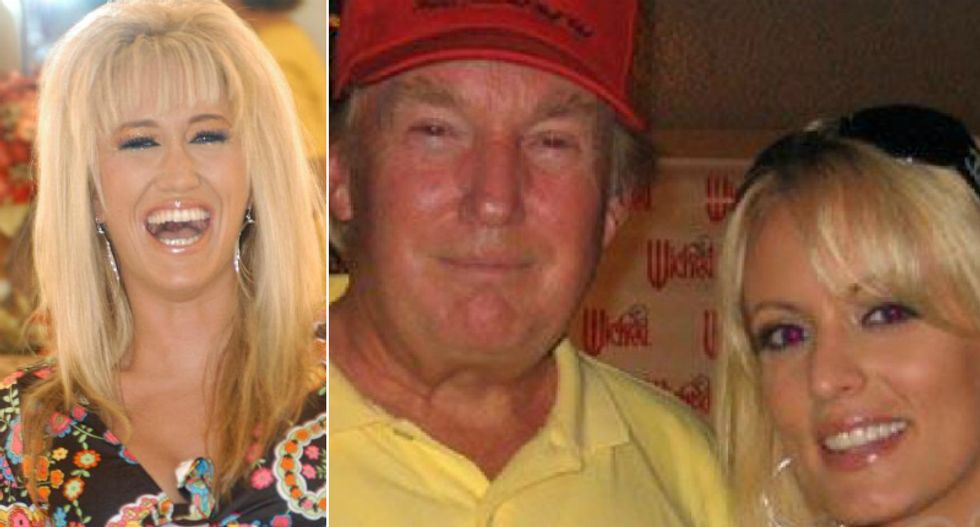 "Now we turn to a story that in any other administration would be getting wall-to-wall coverage all night every night. An adult film star basically putting out information about details of a previously undisclosed affair with the current president," Melber reported. "These reports are about the lengths that Donald Trump allegedly went to silence a woman who says they had a consensual relationship."

"Stephanie Clifford, she performs under the name Stormy Danielles and had told reporters that she had an 11-month relationship with Donald Trump while he was married," Melber continued. "She says she was talking to reporters all the way back during the election."

"All of this matters because it adds some apparent corroboration to that new Wall Street Journal report on an alleged $130,000 this woman received from Donald Trump's lawyer, also for her silence," Melber explained.

Melber introduced Jacob Weisberg, who had been investigating the story for Slate since before the election.

"If this story broke about any other president, Obama, Bush, you name it, would it be bigger in your view than the way this story feels today?" Melber asked.

"Do you see significance about some of the claims in the Russia story?" Melber asked.

Melber, who had been taking notes, showed the camera that he had written down "conduct, lies, blackmail."

Former federal prosecutor Barbara McQuade explained how the hush money could be seen as an attempt to silence a witness.

"I think one point that you touched on is, the whole concept, 'it's not the crime, it's the cover-up.' It's not really a crime to be involved in this kind of relationship, it's certainly embarrassing and certainly something that Donald Trump is not proud for the world to know."

"Do you think that Bob Mueller looks at all this and it affects how he weighs the evidence whether the compromise or blackmail claims in the dossier could be true?" Melber asked.

"I think he does, because when you think about relevance, the question is, does this fact make other facts more or less likely to be true. If you see this kind of activity, if it's true, occurring in this country, why would we think this his behavior in a foreign country might be any different?"

"I do think it's going to be an important fact for him to be about, but I think the propensity to engage in sexual activity and then to try to lie about it and when you're doing it in a place like Russia, you're potentially exposing yourself to blackmail," McQuade explained.