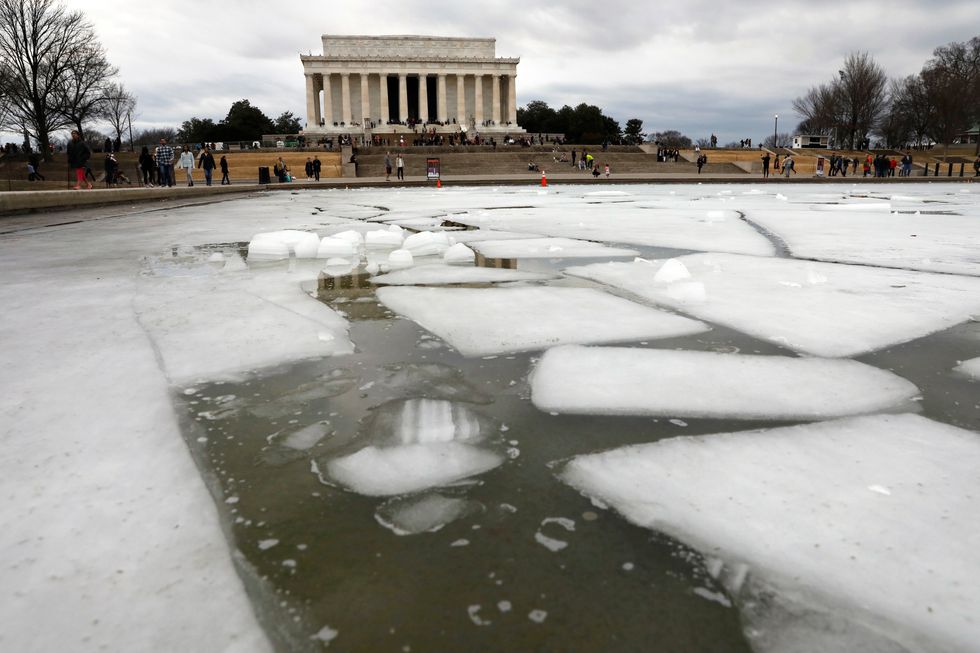 Lincoln Memorial is seen with an icy reflecting pool in Washington, U.S., on the second day of Government shutdown, January 21, 2018. REUTERS/Yuri Gripas

Republican and Democratic senators raced on Sunday to try to break an impasse and hammer out a deal that would end a two-day-old U.S. government shutdown before the start of the work week.

In a flurry of negotiations, the two parties' leaders in the Senate huddled behind closed doors following discussions by a bipartisan group of moderate lawmakers who said they made progress toward a compromise to reopen federal agencies before Monday morning.

While there were no signs of an immediate breakthrough, an emerging agreement appeared to involve ending the deadlock in return for a promise by majority Republicans to deal with Democrats' immigration concerns in coming weeks.

The decision on whether to move forward was in the hands of Republican Senate Majority Leader Mitch McConnell and his Democratic counterpart, Senator Chuck Schumer, although uncertainty remained over how President Donald Trump would respond to any deal.

As the two parties continued to exchange blame for the shutdown, it was unclear whether they would be able to strike an agreement. McConnell set a crucial procedural vote for 1 a.m. (0600 GMT) on Monday on a temporary spending bill.

“I’m hoping they are going to agree to something soon," Republican Senator Jeff Flake said of the McConnell-Schumer talks.

Roy Blunt, a junior member of the Republican Senate leadership, said there was a "chance" of a resolution on Sunday night. But John Cornyn, the No. 2 Republican in the Senate, told reporters when asked if he thought the government would remain shuttered on Monday: "Right now, yeah. I do."

Funding for federal agencies ran out at midnight on Friday, and was not renewed amid a dispute between Trump and Democrats over the politically acrimonious issue of immigration.

Refusing to support another short-term government funding extension last week, Democrats demanded that the Republican president live up to an earlier agreement to protect "Dreamers," immigrants brought to the United States illegally as children, from deportation.

"We need to have a substantive answer, and the only person who can lead us to that is President Trump. This is his shutdown," Dick Durbin, the second-ranking Democrat in the Senate, said on the CBS "Face the Nation" program.

Later on Sunday, Durbin said Senate leaders were discussing a "path" to a vote to provide legal protection to the Dreamers, although he did not know how far the discussions had advanced.

Trump and other Republicans said earlier on Sunday they would not negotiate immigration or other issues as long as all but essential government services remain shuttered.

"We will not negotiate on the status of unlawful immigrants while Senator Schumer and the Democrats hold the government for millions of Americans and our troops hostage," White House press secretary Sarah Sanders said.

The shutdown is the first since a 16-day closure in October 2013. Its effects will likely be more visible on Monday, when financial markets and federal offices open.

The Senate vote early on Monday will be on whether to advance a measure to fund the government through Feb. 8, McConnell said on Saturday. But several senators said on Sunday the vote could be accelerated.

Trump, who spoke by phone to Republican lawmakers and agency heads on Sunday but has not had any public appearances since Friday, canceled a weekend trip to his Mar-a-Lago estate in Florida that included a major fundraiser on the anniversary of his first year as president.

The White House said his planned trip to the World Economic Forum in Davos, Switzerland, this week was in flux because of the standoff.

With elections set for November for a third of U.S. Senate seats and the entire House of Representatives, both sides are maneuvering to blame the other for the shutdown.

Trump said earlier on Sunday that if the stalemate continued, Republicans should change Senate rules so a measure could be passed to fund the government.

Current Senate rules require a super-majority of three-fifths of the chamber, usually 60 out of 100, for legislation to clear procedural hurdles and pass.

But McConnell rejected the idea.

Republicans hold a slim 51-49 majority in the Senate.

'HOSTAGES RIPE FOR THE TAKING'

"To most Americans, those sound like fundamental responsibilities" of government, McConnell said. "To the Democratic leader, apparently they sound like hostages ripe for the taking."

White House budget director Mick Mulvaney said Trump had instructed him to ease the effects of the shutdown as much as possible.

"The president has told me: 'Make sure as many people go to work Monday as possibly can. Use every tool legally available to you,'" Mulvaney said on "Face the Nation."

Schumer and his colleagues accused Trump of being an unreliable negotiating partner, saying the two sides came close to a deal on immigration several times, only to have Trump back out under pressure from anti-immigration conservatives.

Wall Street gave a muted reaction to the shutdown, with U.S. S&P stock index futures slipping slightly at the open of trading on Sunday night - last down 0.1 percent. Treasury futures prices eased and the dollar index against a basket of currencies was slightly weaker.

“Any brief shutdown is clearly a non-event," said Tim Ghriskey, chief investment strategist at Inverness Counsel. "But as the shutdown elongates or lasts a week or longer, the world markets will become concerned."

By Susan Cornwell and Ginger Gibson