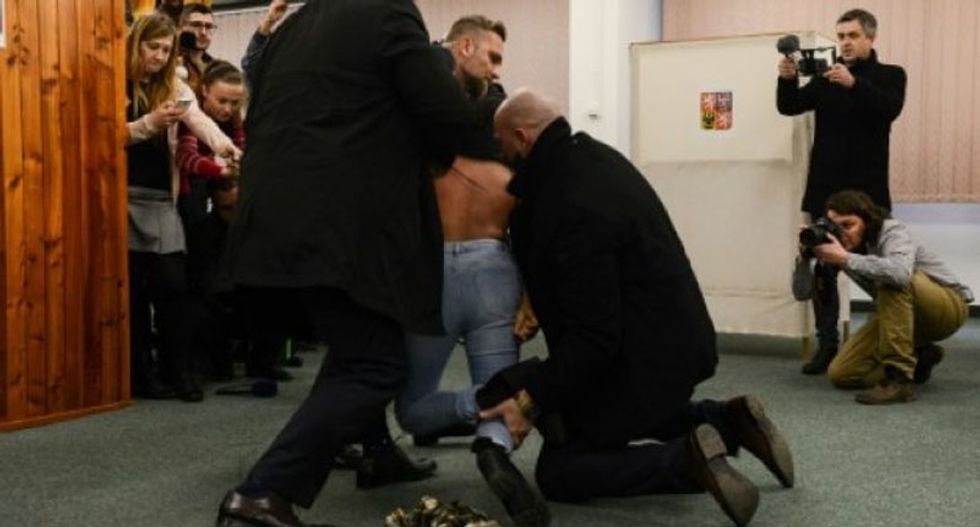 A bare-breasted woman ambushed pro-Russian Czech President Milos Zeman on Friday as he was about to vote in an election that could win him a second term, calling him "Putin's slut."

The woman wearing only blue jeans was swiftly overpowered by the president's bodyguards, an AFP journalist saw.

Some bodyguards had to help a visibly rattled Zeman, who walks with a cane, leave the room.

The 73-year-old ex-communist later told reporters he felt "honored to be attacked by a member of the Femen movement, that has also attacked the pope".

Femen, founded in Ukraine, has staged anti-Kremlin protests and is now also focuses on the Catholic Church which it says suppresses women's rights.

Femen confirmed responsibility for the stunt in a video of the incident posted on its Twitter site.

Polls show the divisive Zeman leading the pack of nine candidates ahead of Jiri Drahos, the 68-year-old pro-European former head of the Czech Academy of Sciences.

Although he is in pole position, the outspoken head of state -- who uses a cane to walk -- is unlikely to win an outright majority and is set to face a run-off vote on January 26-27.