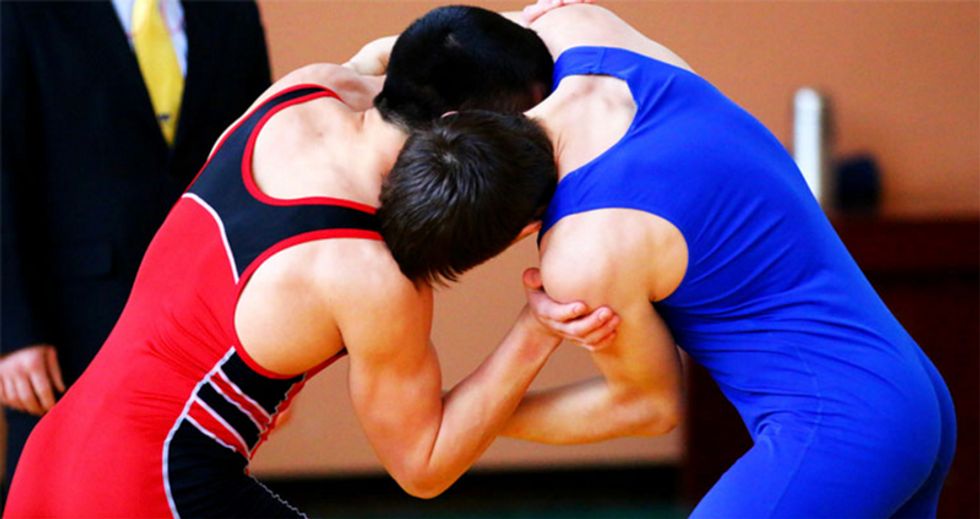 A group of wrestlers at a Casper, Wyoming high school have been accused of assaulting and holding down a freshman teammate as they waterboarded him, reports the Casper Star Tribune.

According to to two sources who are friends of the teen's family, the incident occurred on January 3 at Kelly Walsh High School, following some teasing as the athlete was grabbed by three teammates and forced deeper into the locker room.

One source, who asked to remain anonymous, said the unidentified wrestler attempted to escape but his assailants "“yanked him back, and they threw him on a bench.”

“One kid held his legs, two other kids held his arms, they put a towel over his head, and one kid said, ‘Let’s p*ss in his mouth’” the accuser recalled.

According to the report, the wrestlers placed a towel over the struggling teammate's face and began pouring water on it as the victim choked. Afterward they rubbed a cream on him used by wrestlers after a match to protect against skin infection, before allowing him to walk into the showers and wash it off.

The report states that no coaches were present during the attack, however one walked in while the freshman was in the showers. After the coach left, the attackers told the victim that if he told anyone they would waterboard him again. The sources also stated that the attack was recorded on Snapchat, but then images were gone after 24 hours.

The day after the reported attack, the victim and his family met with Kelly Walsh principal Brad Diller and contacted police about the alleged assault.

According to one of the sources, wrestling coach Travis Peak was questioned, and  later called the victim’s family and told them the attack couldn’t have happened because the boys weren’t left alone in the showers long enough.

Peak has since refused to make any further statements.

School officials acknowledged that there had been a case of "extreme bullying," and that it is being investigated, but refused to divulge any details.

"Natrona County School District is aware of an isolated incident involving a violation of the student code of conduct,” the district wrote in its original statement, issued on Jan. 16. “Upon receiving information regarding the incident, an investigation was immediately conducted. As a result of the investigation, behavioral and student code of conduct disciplinary consequences were implemented.”