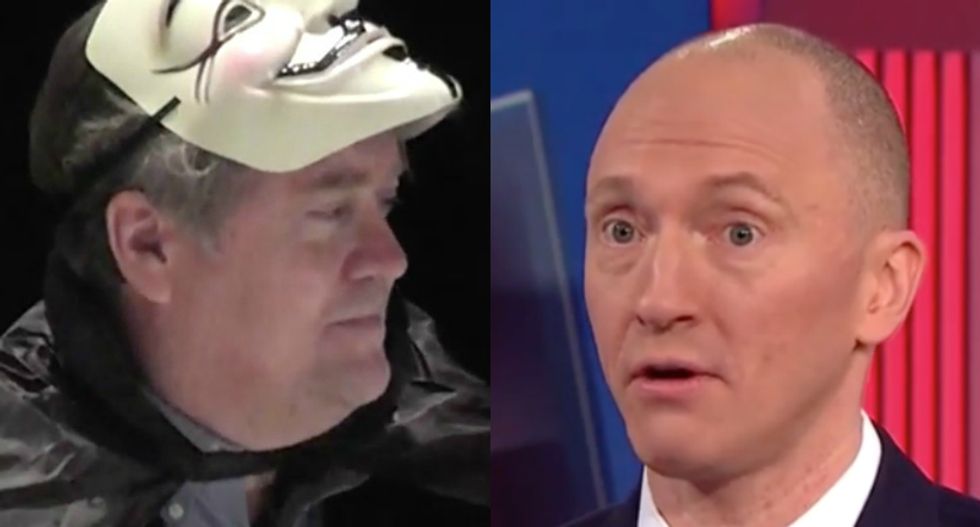 Politico reported Thursday that Page had already testified before the intelligence committee that he had a January 2017 interaction with Bannon, who asked him to nix a scheduled interview with MSNBC the week of the release of the Fusion GPS dossier, which contains allegations that President Donald Trump coordinated with Russians to win the American presidential election.

"If Page was using one of his standard phones, it was probably picked up," Elizabeth Goiten, a former Justice Department attorney who now co-directs the Brennan Center for Justice's Liberty and National Security Program, told Politico.

"The significance of a possible FBI recording depends on the exact content of the conversation between Bannon and Page, about which Page has been vague," the report noted. "But it means the FBI's surveillance of Page — which has been the subject of intense partisan anger in Washington — may have touched one of the highest-ranking figures in Trump's incoming administration just days before inauguration."

Bannon, the report continued, did not comment on Politico's report and "hasn't been accused of any impropriety."

The "dodgy dossier," as Page has repeatedly called the Fusion GPS document, now lies at the heart of the GOP's argument that the FBI and DOJ abused their surveillance powers. They allege the dossier was the main motivator the secretive Foreign Intelligence Surveillance Court granting and renewing warrants for Page's wiretaps. Page, however, has been under FBI surveillance since 2014 for his suspected ties to the Kremlin.