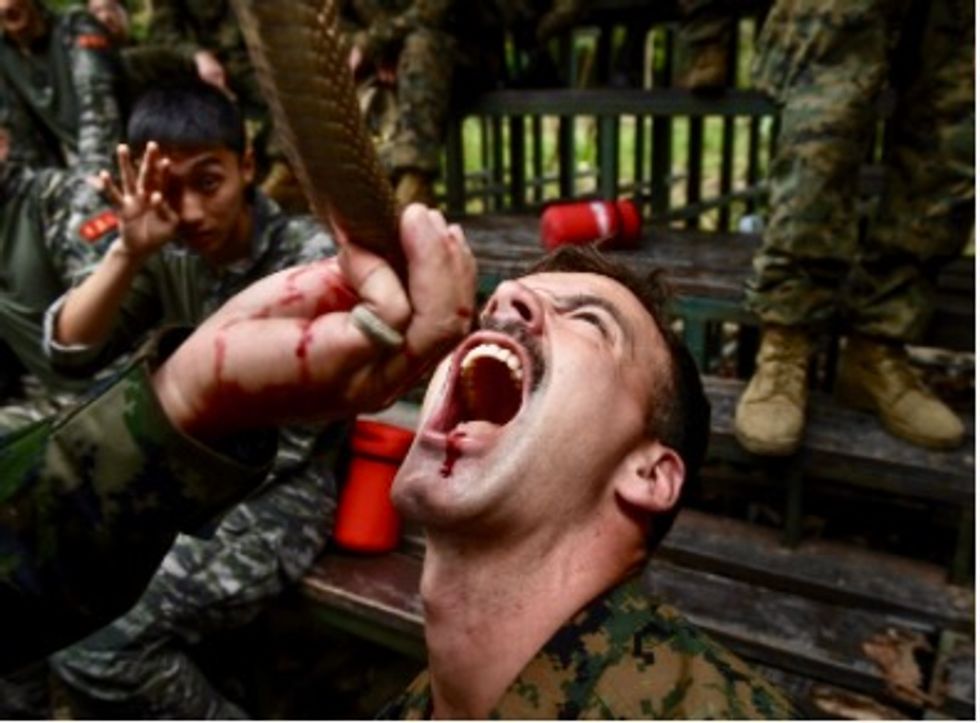 US and Thai marines slurped snake blood and ate scorpions in a jungle survival programme on Monday as part of the two nations' annual Cobra Gold war games.

Now in its 37th year, Cobra Gold is one of the largest military exercises in Asia, bringing thousands of troops from the United States, Thailand and other countries for 10 days of field training on Thai shores.

On Monday, several dozen US and Thai marines took park in an annual jungle survival drill on a Thai navy base in Chonburi province, where troops took turns drinking blood from a severed cobra before grilling and eating the snakes.

Thai military trainers also taught the group -- which included South Korean troops -- how to remove venom from scorpions and tarantulas before eating them, find water in jungle vines and identity edible plants.

"The key to survival is knowing what to eat," said Thai Sergeant Major Chaiwat Ladsin, who led the drill that also saw the marines take bites of a raw gecko.

"Definitely my first time drinking snake blood... It's not something we do too often in America," US Sergeant Christopher Fiffie told AFP after the training.

"I think I'll be able to hold my own out there," he added. "The biggest take was how exactly they get their water as well as the vegetation that you can eat."

This year's Cobra Gold exercise drew some 6,800 US personnel to the war games -- nearly double last year's attendance, in the latest sign of warming relations between the two allies.

A 2014 army coup in Thailand tested ties with Washington, which urged a return to democracy and scaled back military aid.

But the two countries have upped their engagement under US President Donald Trump, who has taken a softer stance on human rights issues and even embraced Thai junta chief Prayut Chan-O-Cha in the White House.

The US is also keen to flex its military muscle in Asia amid tensions with North Korea over the pariah state's nuclear missile programme.

"The (attendance) numbers are reflective of the US commitment in the region," US embassy spokesman Stephane Castonguay told AFP at the start of the exercise.

"The focus of this exercise still remains humanitarian assistance and disaster relief, in addition to community relations projects."