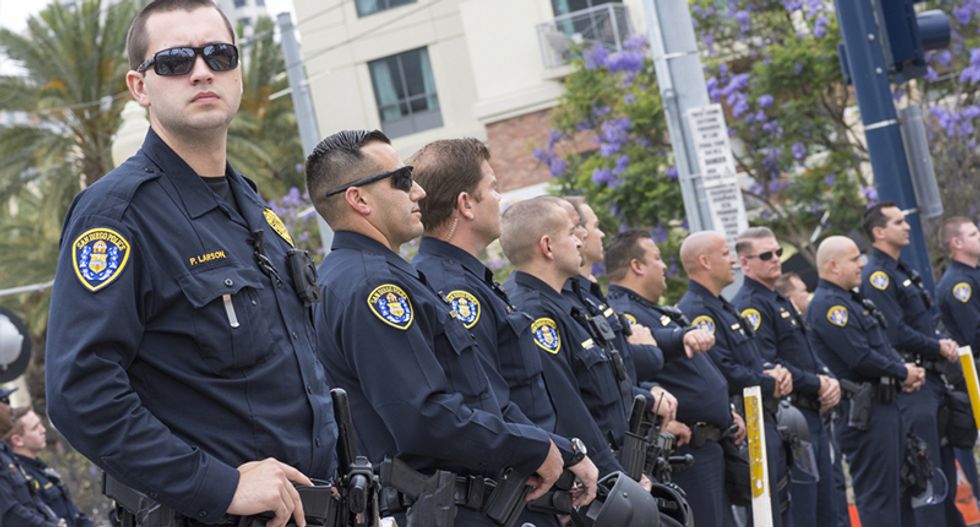 Prototypes are being erected on the southern California border with Mexico so President Donald Trump can decide which "wall" he wants to stand as the all encompassing solution to drugs, crime and undocumented immigrants. Fearing protests and retribution from activists, the city was given $50,000 to "prepare" for the prototypes. What they spent it on wasn't exactly helpful.

According to The San Diego Union Tribune, the city purchased hundreds of rounds of pepper spray, crowd-dispersing grenades that throw out rubber balls and tear gas. None of it was used much less needed as there were no protests. While they were warned of mass demonstrations that never materialized, they spent a lot of money on brown bag lunches and Costco pizza.

This does not include the $826,354 the city spent on "security," or the overtime and supplies that totaled $1.6 million. Yet, the police department wasn't actually providing security for the wall. Instead they "patrolled" and "secured" the area near the building site. After those facts surfaced, the paper requested specifics about the $50,000. Records show the Department of Homeland Security feared large demonstrations after a Wall Street Journal report and instructed the police to prepare.

On Sept. 12, the police requested $25,000 to purchase food for the project and cautioned that they could need more.

“We may need to increase this depending on how the protests go as costs could rise to $100,000 or higher,” a management analyst wrote.

One week later, it was obvious police built it, but the protesters weren't coming. While they initially ordered huge sums of food, they ended up only spending $5,778 in bagged lunches and two dozen pizzas.

The largest price tag came from riot gear and ammunition, including special launchers for pepper spray projectiles. They also purchased 100 chemical grenades that release CS gas (or tear gas) and grenades that launch rubber bullets for up to 50 feet.

Police claim they don't have enough equipment on hand for the SWAT team.

“Our current inventory of munitions will not meet the demands of a long sustained and violent protest,” Capt. Rudy Tai of the Operational Support Division wrote for the September request. They spent $33,969 on bullets and tactical gear.

There was a small rally on Dec. 9, which was after the walls were constructed and the construction crews left. The city won't be reimbursed by the federal government for the costs.