SC woman takes down Confederate flag after heart attack: ‘I finally had an eye-opening experience’ 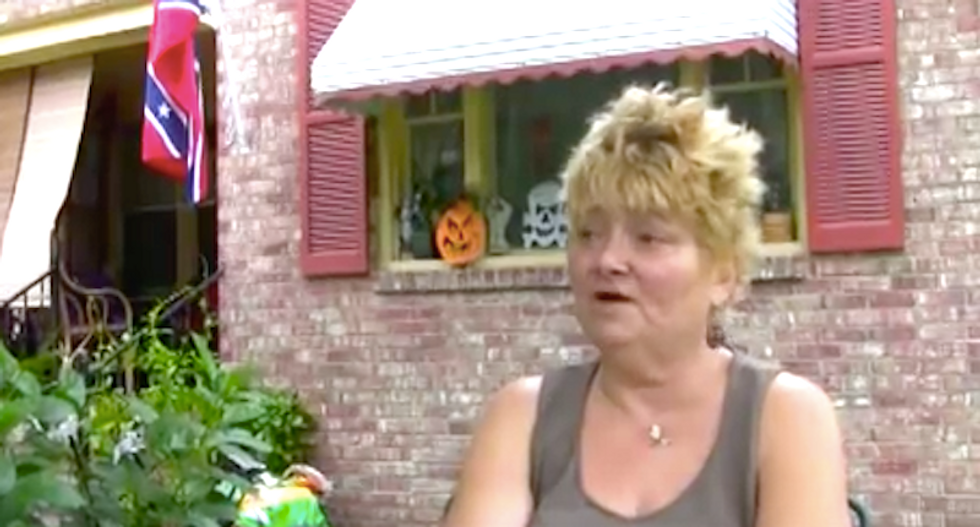 Annie Caddell once vowed she would die before taking down her Confederate flag -- but that's what she did after nearly dying from a heart attack.

The South Carolina woman said the near-death experience, which required triple bypass surgery, caused her to reflect on the choices she'd made in life -- including the lengthy battle she'd waged with her mostly black neighbors over the flag, reported The Post and Courier.

"After seven long years of battling my community over my Confederate flag, I made the decision that I would like to have unity in my community," Caddell told the newspaper.

The 58-year-old Brownsville woman had refused to take down the Confederate flags and other paraphernalia decorating her house, even after 270 neighbors signed a petition asking the town to step in.

City officials said Caddell had a right to display the items, and neighbors raised money in 2011 to build eight-foot wooden fences on either side of her property line to block the flag from view.

Caddell insisted all along that the flags weren't intended to be racist, but she had a change of heart after her medical emergency.

"I made up my mind that I don't have to hurt anybody because of a decision I made without much thought," she said. "I never considered how offended they truly were -- I didn't care. Well, I finally had an eye-opening experience. It's not about what I feel."

A friend helped Caddell replace the banner Wednesday with a state flag, and they gave the Confederate flag to Community Resource Center founder Louis Smith, who gave it to a local history museum.

"I told her we would do it honorably," Smith said. "This was not a time for high-fiving. This was a solemn occasion. These were people that fought for a cause, even though what they stood for I adamantly oppose."

Caddell had feuded with neighbors since moving in 2010, five years before a white supremacist gunned down nine worshipers in a historically black South Carolina church, prompting a reexamination of Confederate flags flown on state property.

"There comes a time and a place where things need to be set aside for the betterment of others," Caddell said. "I can still honor my relatives that died in the Civil War without flying the flag."