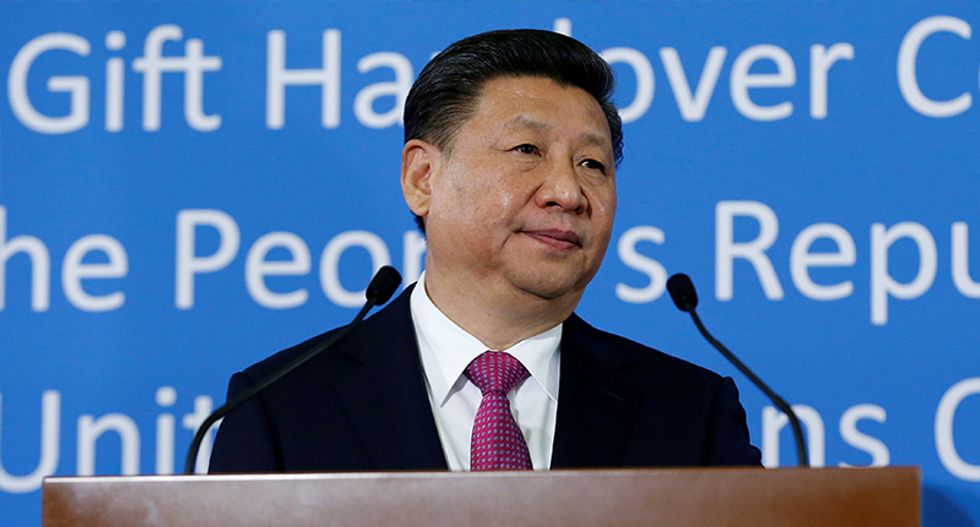 President Xi Jinping's leap toward lifelong rule has largely been met by guarded silence in world capitals as governments try to predict how China's formidable leader will wield his newfound power on the global stage.

The Communist Party's move to lift presidential term limits will allow Xi to reign supreme as he pushes through an ambitious agenda to turn China into a military and economic superpower by mid-century.

"Xi has all this power. But we don't really know what he wants to use it for," said Kerry Brown, the director of the Lau China Institute at King's College London.

"If it's to address the challenges that need sorting out in China then that will be a good thing. If not, then it will be deeply problematic."

China is already causing global jitters with its growing assertiveness, from its territorial claims in the South China Sea to the opening of its first overseas military base in the Horn of Africa and its influence in capitals across the Western world.

Xi has championed one of the largest international infrastructure projects in history, the $1 trillion Belt and Road initiative, which has drawn both interest and suspicion about China's intentions.

At the same time, it is teetering on the brink of a trade war with the world's largest economy, the United States.

At home, the move has been hailed by state media as a necessary measure to usher in an era of "stability" that will provide a reassuring beacon of hope to countries spooked by the turmoil of American politics.

"In the future, with Xi leading the country for a very long time, it's guaranteed that foreign relations will be stable and predictable," Wu Xinbo, a US politics expert at Fudan University, told AFP.

The Communist Party's constitutional amendment is certain to be approved by the rubber-stamp National People's Congress when it begins its annual session next week, which will enable Xi to remain president beyond 2023.

Where countries stand on the move largely depends on where they sit.

In Russia, whose President Vladimir Putin's unyielding grasp on power is often cited as a model for Xi's rule, the reaction to the abolition was largely positive, according to Alexander Gabuev, a senior fellow at the Carnegie Moscow Center.

Although some China-watchers expressed concern that China could slip back into Mao-style authoritarianism, the government thinks that Xi "staying in power beyond 2023 is a good thing," especially as "relations with the West are hitting new lows every month."

But Xi's power play is likely to fuel growing suspicions about China in Western countries.

After the election of Donald Trump in the US, China tried to step into the vacuum created by his rapid withdrawal from international trade pacts and environmental agreements.

But "getting permission from a rubber stamp legislative branch to become autocrat-for-life only undermines the ability of democratic leaders to afford such respect," said Orville Schell, director of the Center on US-China Relations at the Asia Society in New York.

It will look particularly bad in Australia, New Zealand and the United States, where concerns about China's growing power and how it chooses to exercise it have increasingly preoccupied lawmakers.

The White House has avoided criticism of the move, saying the decision was "up to China".

But "there's been a lot more concern about China and what it wants abroad," said Eric Hundman, an international relations expert at NYU Shanghai.

"Everybody's going to read this as he's going to become a dictator, which makes China look much more threatening."

Xi's consolidation of power means that China's own foreign policy will likely become more assertive, said Bonnie Glaser, a China expert at the Washington-based Center for Strategic and International Studies.

If the term limit repeal is a sign of strength, that could mean that Xi will increasingly be surrounded by sycophants and yes-men

"Xi is unlikely to get balanced, objective input and advice. He may be overconfident about what he can achieve," Glaser said.

That could mean a China that is "even more aggressive" in its use of economic coercion and its assertion of its territorial rights in places like the East and South China Sea, where it has long-standing disputes with its neighbours.

NYU's Hundman warned that if Xi's apparent power grab is a sign of weakness, then that "may lead to actions on China's part that look irrational... but are directed at domestic audiences."

He could do things such as threatening Taiwan that are aimed at "whipping up popular support. They would look very provocative to us, from a foreign perspective, but they may not be intended that way."