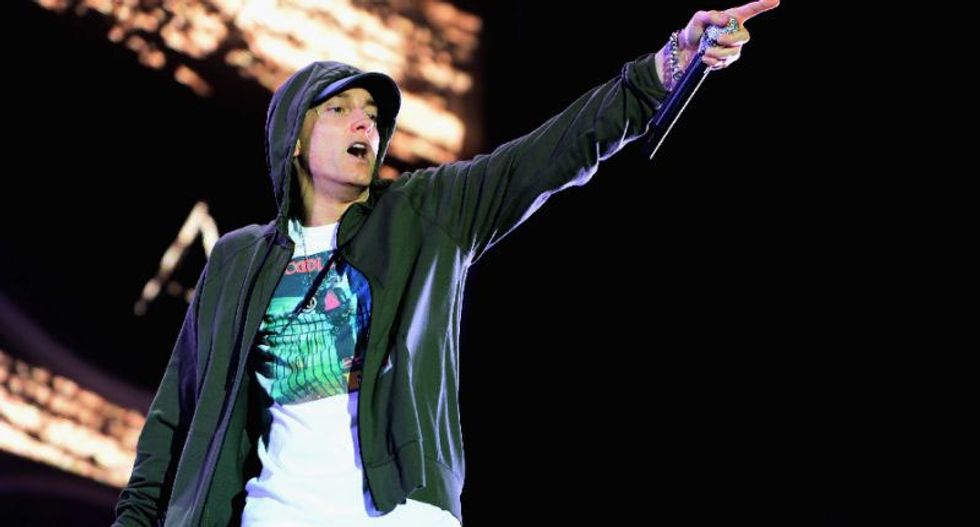 Eminem denounced the US gun lobby for its political power, the latest political intervention from the rap superstar.

Performing over the weekend at the fan-voted iHeartRadio Music Awards, Eminem added a verse about the National Rifle Association at the start of his song "Nowhere Fast."

"This whole country is going nuts / And the NRA is in our way," Eminem, clad in a black hoodie, rapped during the televised awards Sunday night in Los Angeles.

"They're responsible for this whole production / They hold the strings / They control the puppet," he rapped.

"Nowhere Fast," whose collaborator Kehlani sing with Eminem at the awards, appears on the rapper's latest album, "Revival" in which the 45-year-old star showed a more political side with impassioned denunciations of President Donald Trump.

Eminem -- early in his career better known for controversial lyrics about women and gays -- last year drew headlines with an intensely anti-Trump freestyle rap at another show, the BET Hip Hop Awards.

In that televised appearance, Eminem skewered the president's stance on white supremacy and warned Eminem fans they had to choose between him and Trump.

Eminem's new political voice has become all the more striking as he is by far the most successful white rapper of all time, with a fan base that partly overlaps with Trump's key demographic.

The National Rifle Association is famous for its political muscle and has strenuously opposed any major attempts to curtail gun ownership in the United States, which has a higher rate of firearm deaths than any other developed country.

High school students who survived last month's mass shooting in Parkland, Florida, which killed 17 people, have launched a campaign to defy the gun lobby and press for gun control.