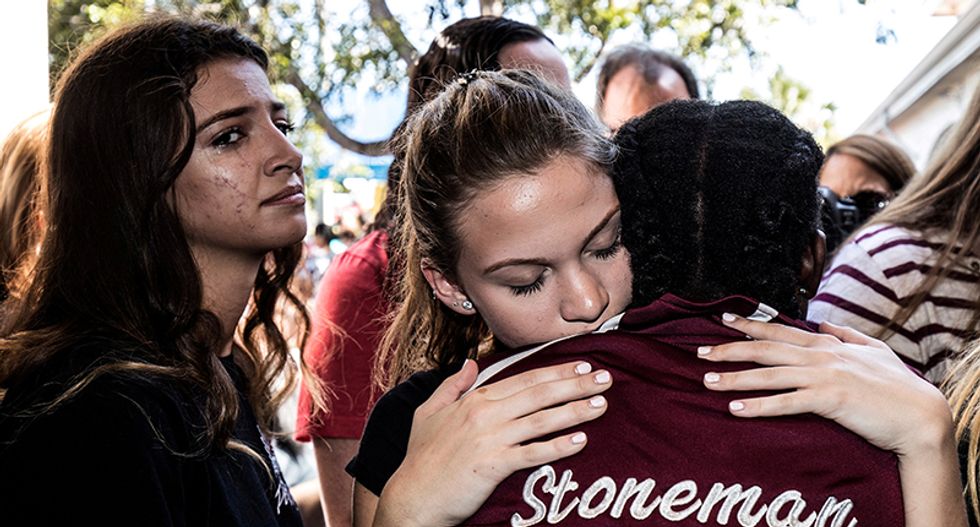 Hundreds of Florida high school students headed for Washington on Thursday to take part in a weekend march for gun control organized by fellow teenagers after the massacre at a school in the southern US state.

Wearing their maroon school colors, students from Marjory Stoneman Douglas High School, where 14 students and three adults were killed on February 14, boarded a flight for Washington.

"The World is Changed With Your Actions, Not With Your Opinion," read a sign carried by a student at Fort Lauderdale airport.

Other Parkland students and teenagers from other south Florida high schools boarded buses for the long drive to the US capital.

The "March For Our Lives" is to be held on Saturday in Washington and other cities around the country.

Hundreds of thousands are expected for what it being predicted to be the largest-ever rally for gun control in the United States.

"This is going to be a real moment of change in this country," student David Allen told 7 News Miami. "I think a decision on gun control is going to be made."

Carlos Rodriguez, 17, a Stoneman Douglas student heading for the march, said he had mixed feelings.

"This march wouldn't be happening if the shooting hadn't happened at my school so it'll be difficult," Rodriguez told AFP.

"But I'll feel proud to be one of the students who started this movement and to have students from around the country taking part," he said.

The Broward County school superintendent announced meanwhile that students at Stoneman Douglas and other district schools would only be allowed to use clear backpacks when they return after spring break.

The see-through backpacks will be provided free of cost, superintendent Robert Runcie said in a letter to parents.

Runcie said students and staff will also have to wear ID badges at all times and the district is considering adding metal detectors at entrances to schools.

The clear backpacks requirement drew a biting response from one Stoneman Douglas student.

"Great. Because clear backpacks are gonna fix everything," tweeted Lauren Hogg, who has emerged as a leader of the student movement along with her brother David.

"I appreciate the attempt, but I'd rather have common sense gun laws than a clear backpack," Hogg said.

Nikolas Cruz, a troubled 19-year-old former Stoneman Douglas student, was arrested after opening fire on his former classmates on Valentine's Day with an AR-15-style semi-automatic rifle.

Prosecutors have called for the death penalty.