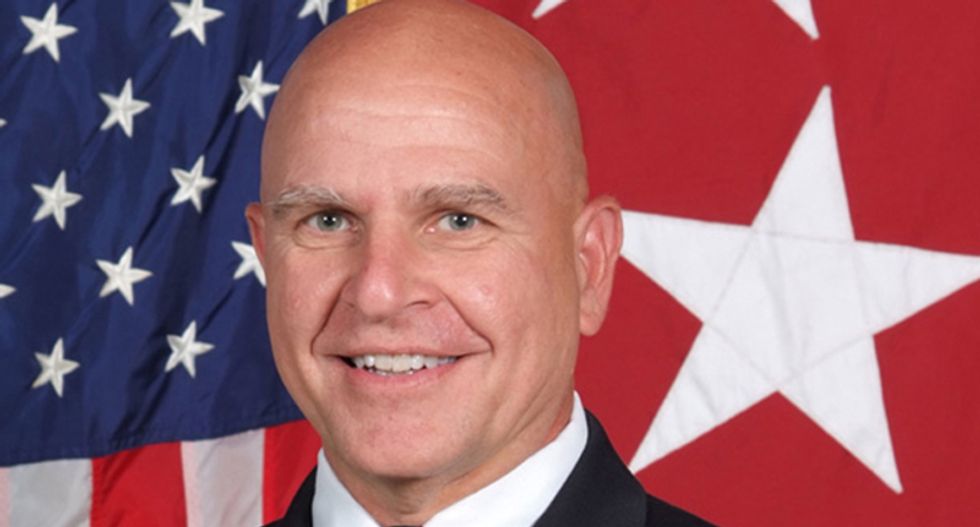 Lieutenant General HR McMaster gained fame for a landmark book blaming politicians for the US debacle in Vietnam.

After one year at the White House as President Donald Trump's national security adviser, he likely doesn't have a higher opinion of Washington's political elites.

On Thursday McMaster announced he would be stepping down to make way for Bush-era defense hawk John Bolton -- and became the latest victim of the never ending bedlam, infighting and capriciousness that has characterized decision-making under Trump.

The serving officer had been widely expected to leave the White House later this year and return to the army with a promotion as a four-star general.

But his decision to retire from public life entirely came as a surprise.

"After thirty-four years of service to our nation, I am requesting retirement from the US Army effective this summer after which I will leave public service," he said in a statement.

"Throughout my career it has been my greatest privilege to serve alongside extraordinary service members and dedicated civilians."

Herbert Raymond McMaster made the move from the Pentagon to the White House as a proven battlefield hero -- he led a now-legendary tank battle in the first Gulf war -- and a respected military intellectual.

His pointedly titled book "Dereliction of Duty" earned him huge respect throughout the services as it savaged the politicking and careerism that he argued sank the military's battle plan in Vietnam in the 1960s.

When the three-star army general replaced Michael Flynn, Trump's first national security advisor who stepped down after 22 days over his murky contacts with Russians, there was a surge in hope that foreign policy neophyte Trump would be in safe hands.

He would form a triumvirate with Defense Department chief James Mattis and Secretary of State Rex Tillerson to keep a steady hand on the tiller.

He was enough in the "us versus the world" school of thought to work with Trump.

"Geopolitics are back and are back with a vengeance after this holiday from history we took in the so-called post-Cold War period," he said in a speech late last year.

He took a harder line than his colleagues on North Korea, mulling a pre-emptive strike against its nuclear threat, saying "traditional deterrence" might not work with Pyongyang.

But, like Mattis and Tillerson, he resisted Trump's instinctual rejection of multilateralism. McMaster is credited with blocking Trump's push to end the Iran nuclear deal, and bending Trump's attacks against NATO into just niggling criticisms over money.

He partly restored the mess of the NSC that Flynn left, regularizing a policy process and coordinating with other agencies, while driving out acolytes of Flynn and Steve Bannon, the president's arch strategist.

For that he had to endure a withering campaign from the hard right to force him out, one which labelled him a liberal, an enemy of Israel and pro-Iran, among other things.

But his efforts to systematize the policy process weren't enough, said Heather Hurlburt, a national security and government policy expert at the New America thinktank.

"The hope was that McMaster would form a smoothly functioning triumvirate with Mattis and Tillerson and he hasn't been able to do that."

"What is different here is you have a president who doesn't trust process and loves to pit his senior people against each other. You know, they were placed in a cage match," she said.

Trump's approach to foreign policy "has moved a lot of us out of our comfort zone, me included," McMaster told the New York Times.

And over time balding, gruff 55-year-old lost the ability to shift Trump's thinking. He never really clicked with Trump, who bristled at McMaster's lecturing on policy, preferring the more deferential hands of Mattis and CIA chief Mike Pompeo.

Perhaps the final straw was when McMaster, echoing the consensus of the entire US intelligence establishment, told a conference in Munich that the evidence was "incontrovertible" that Russia meddled in the 2016 election.

Trump, hyper-sensitive to the implication that Moscow aided his victory, publicly rebuked him.

"General McMaster forgot to say that the results of the 2016 election were not impacted or changed by the Russians," Trump tweeted.