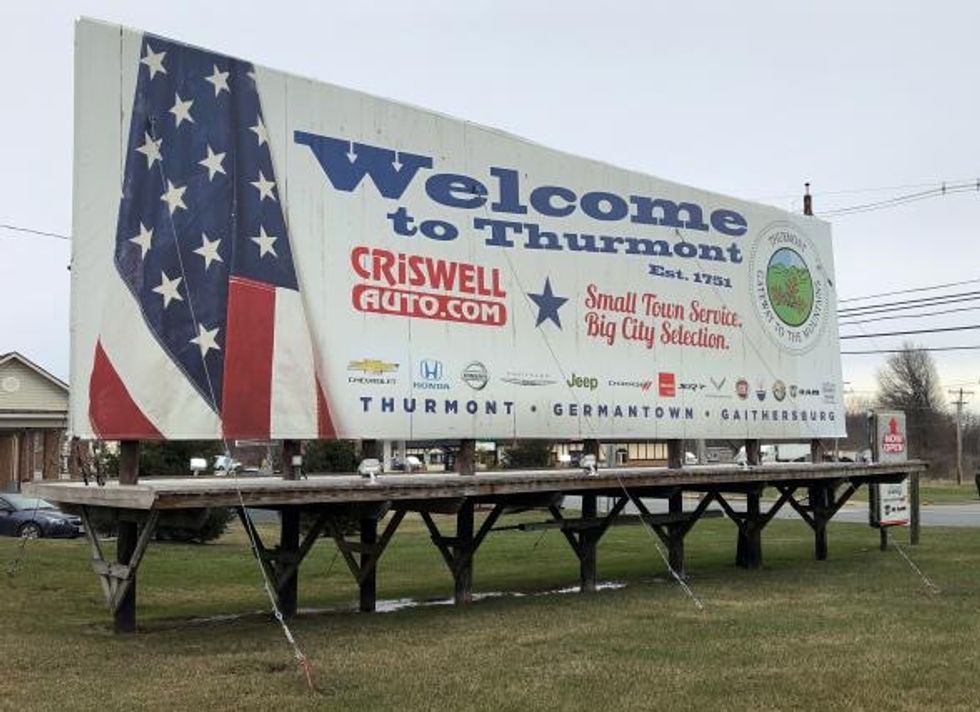 FILE PHOTO: A sign welcoming visitors to the town of Thurmont, is pictured in Thurmont, Maryland, U.S., March 12, 2018. REUTERS/Lawrence Hurley

Eyler, a retired business owner in the small town of Thurmont roughly 55 miles north of the U.S. capital, said he thinks he and others like him were being targeted by the Democrats because of their party affiliation. He was inserted into a Democratic-leaning congressional district in an electoral map that diminished the statewide clout of Republican voters.

“There’s nothing we can do or say or vote that will make any difference,” Eyler said in an interview.

Eyler is one of nine Republican voters who pursued a legal challenge against a portion of Maryland’s electoral map. Their closely watched case will be heard by the U.S. Supreme Court on Wednesday.

It is one of two major cases the nine justices are tackling during their current term concerning a practice called partisan gerrymandering in which a state’s majority party redraws legislative districts with the intent of tightening its grip on power. The justices on Oct. 3 heard a challenge by Democratic voters to Wisconsin’s Republican-drawn electoral map.

The question in both cases is whether redrawing electoral maps for extreme partisan advantage may violate the constitutional rights of voters. The rulings, due by the end of June, could change the U.S. political landscape, either by slapping limits on partisan gerrymandering or by allowing it even in its most extreme forms.

While Maryland leans Democratic, it still has its fair share of Republicans and has a Republican governor. Even some Democrats admit Maryland’s electoral map was intended to make it harder for Republicans to win a House seat from the state’s Sixth District. Eyler voted in that district until new electoral boundaries placed him in the heavily Democratic Eighth District, where his vote may have little impact.

Eyler, 69, has lived in Thurmont, in Maryland’s Frederick County, for most of his life and resents the notion that distinct cultural and ethnic communities can be torn apart at the whim of politicians in the state capital seeking to maximize their party’s election prospects.

His House district used to be held by Republican Representative Roscoe Bartlett, who is now out of Congress. Thanks to the new boundaries that reconfigured Bartlett’s former district, Eyler’s congressman now is Democrat Jamie Raskin, who hails from the liberal haven of Takoma Park on the border with Washington.

“The distance between upper Frederick County and Raskin can be measured in light years,” said Eyler, who along with his fellow plaintiffs is appealing a lower court ruling upholding Maryland’s map.

Gerrymandered electoral maps often concentrate voters who tend to favor the minority party into a small number of districts to dilute their statewide clout and distribute the rest of those voters in other districts in numbers too small to be a majority.

Maryland’s redistricting plan added more Democratic voters to the Sixth District from liberal Montgomery County and removed some Republicans including Eyler. The proportion of registered Republicans in that district dropped from 46.7 percent of eligible voters to 33.3 percent and the number of registered Democrats increased from 35.8 percent to 44.1 percent.

The plan led to Democrat John Delaney beating Bartlett to take the district in 2012. At the time, Maryland had a Democratic-controlled legislature and a Democratic governor, Martin O’Malley. Current Republican Governor Larry Hogan filed a brief backing the challengers.

Despite Hogan’s 2014 victory that illustrated Republican strength statewide, Republicans currently hold just one of Maryland’s eight congressional seats because of the way the electoral boundaries are drawn.

The question before the Supreme Court is whether the map violated the U.S. Constitution’s First Amendment guarantee of free speech. The novel legal theory pushed by lawyer Michael Kimberly, a registered Democrat who lives in Maryland, is that Republican voters were retaliated against by Democrats based on their political views.

Maryland Attorney General Brian Frosh said in court papers that his fellow Democrats had merely drawn a “newly competitive” district. Frosh noted that in 2014, Delaney was almost defeated by his Republican rival.

Legislative districts are redrawn nationwide every decade to reflect population changes after the national census. Redistricting in most states is done by the party in power, though some states in the interest of fairness assign the task to independent commissions.

The Supreme Court for decades has been willing to invalidate state electoral maps on the grounds of racial discrimination but never those drawn simply for partisan advantage.