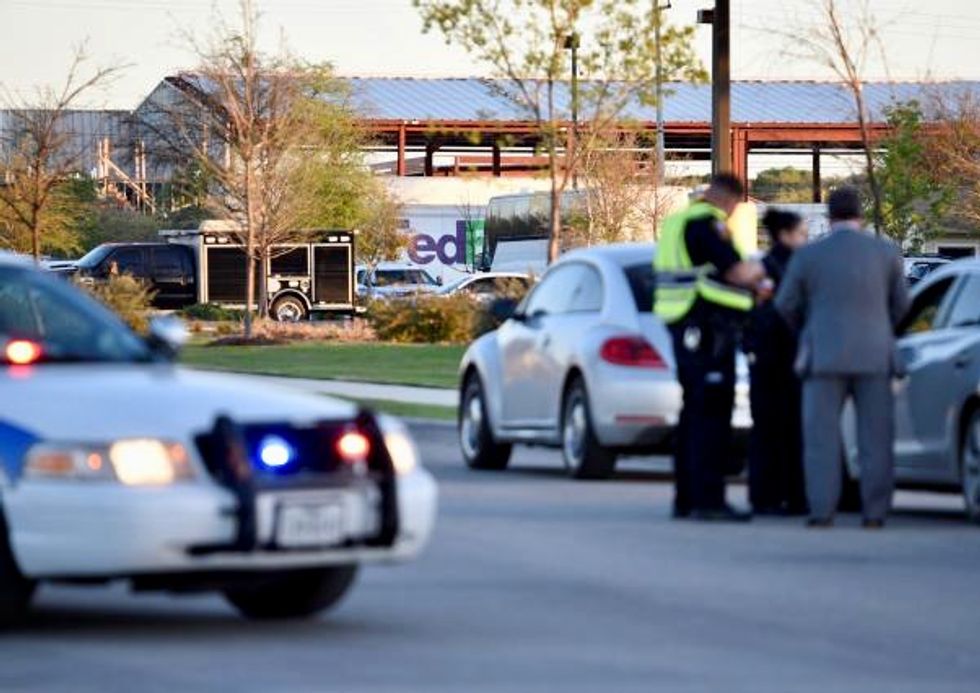 Schertz Police block off Doerr Lane near the scene of a blast at a FedEx facility in Schertz, Texas, U.S., March 20, 2018. REUTERS/Sergio Flores

A package bomb blew up at a FedEx Corp distribution center near San Antonio on Tuesday, officials said, and the FBI was investigating whether it was linked to a series of four homemade bombs that hit the Texas capital of Austin this month.

Officials did not say if the latest incident was the work of what Austin police believe could be a serial bomber responsible for the four earlier devices that killed two people and injured four others.

The blast at the FedEx facility in Schertz, northeast of San Antonio, was the fifth in the state in the last 18 days. If it is linked to the others, it would be the first outside the Austin area and the first that involves a commercial parcel service.

“We are investigating it as being possibly related to our open investigation,” FBI spokeswoman Michelle Lee told the Austin American-Statesman newspaper. “We can’t know for sure until we have an opportunity to look at the evidence itself.”

The package, filled with nails and metal shrapnel, exploded shortly after midnight local time at the facility, about 65 miles south of Austin, the San Antonio Fire Department said on Twitter.

The company described it as a FedEx Ground sorting facility. About 75 people were working at the facility at the time, fire officials said.

The individual or people behind the bombings are likely to be highly skilled and methodical, said Fred Burton, chief security officer for Stratfor, a private intelligence and security consulting firm based in Austin.

“This is a race against time to find him before he bombs again,” Burton said.

A few hours after the blast near San Antonio, police in Austin said they were investigating a suspicious package at a FedEx facility in the city. Roads were closed in an area a few miles from Austin’s main airport, and FedEx employees told local media that work was halted at the facility.

There was no indication the suspicious package on Tuesday morning was related to the serial bombings. Company officials were not immediately available for comment.

More than 500 federal agents were involved in the investigation, officials said, and the White House was monitoring the situation, spokeswoman Sarah Sanders told Fox News.

The first three devices were parcel bombs dropped off in front of homes on in three eastern Austin neighborhoods. The fourth went off on Sunday night on the west side of the city and was described by police as a more sophisticated device detonated through a trip wire mechanism.

The four devices were similar in construction, suggesting they were the work of the same bomb maker, officials said.

The first two bombs killed Anthony Stephan House, a 39-year-old black man on March 2 and Draylen Mason, a 17-year-old African-American teenager on March 12. The third, also on March 12, severely injured a 75-year-old Hispanic woman. Police said they are investigating whether the bombings were hate crimes.

Sunday’s trip wire bomb, which injured two white men who were walking in the neighborhood, went off shortly after police made a rare public call to the suspect to explain his motives.

Austin, with a population of nearly 1 million people, is home to the University of Texas and a plethora of technology companies and has been one of the fastest growing major U.S. cities.