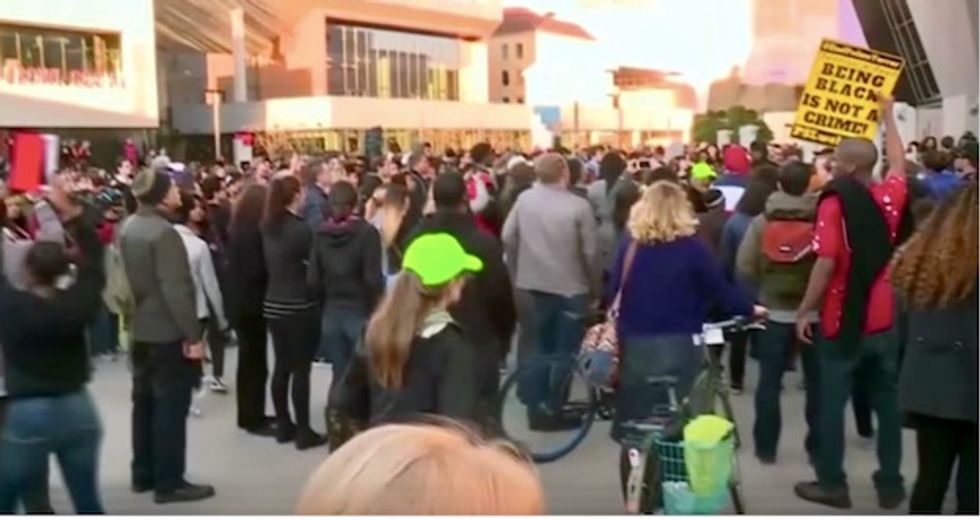 Protestors in Sacramento against killing of Stephon Clark

Newly released video footage of police killing an unarmed black man in a barrage of gunfire in Sacramento, California, left the mayor “horrified” and sparked street protests on Thursday that gridlocked traffic in the state capital for hours.

Police said the video, captured by body cameras worn by officers involved in Sunday night’s confrontation, showed the victim, Stephon Clark, 22, holding an object that later turned out to be a cell phone as he was shot 20 times.

The video was released by police late on Wednesday and it soon went viral on the internet.

Sunday’s shooting was the latest in a series of killings of unarmed black men by police across the United Stated since 2014 that has sparked a national debate about racial bias in the criminal justice system and the use of lethal force.

More than 200 demonstrators gathered on Thursday to denounce the shooting in a protest organized by the Black Lives Matter movement. The protests were orderly and police allowed a group of demonstrators to march onto Interstate 5 at the height of the commuter rush hour as they blocked all southbound lanes.

Traffic was backed up on the highway, and through much of the downtown area, for hours.

The crowd then marched on to the state capitol building before converging outside the Golden 1 Center basketball arena, preventing many fans waiting to see a game between the Sacramento Kings and Atlanta Hawks from getting in to the event.

“It’s a loss of one night’s entertainment for me, but this family will feel this loss forever,” season ticket holder Frank Andersen, a 70-year-old retiree from Elk Grove, California, said as he walked with his wife to their car.

The Kings later issued a statement asking those fans to return home and promising refunds for their tickets.

Hours earlier, Mayor Darrell Steinberg told reporters he was appalled by video of the shooting.

“Like any compassionate person, I was horrified by the death of a young Sacramento man who we later found out had two kids,” Steinberg told a news conference. “What was my reaction? It was horrible.”

Protesters marched into City Hall during the day shouting “It’s a phone, not a gun” and demanded to see the police chief.

“I have four grandbabies who are black and I don’t want them taken,” said protester Tami Collins, 47, who is white.

Sacramento police said the shooting stemmed from a report of someone breaking car windows in a residential area where officers later found three damaged vehicles. Police said the suspect was also seen from a helicopter shattering a glass door of a house before jumping a fence into a yard next door.

The video from police body cameras showed two officers chase Clark through the dark with their flashlights and turn the corner of a house to face him in the backyard, yelling: “Show me your hands” and “gun” before they opened fire.

The officers had seen Clark “advance forward with his arms extended and holding an object,” which they mistakenly believed was a gun, police said.

Officers waited five minutes after the shooting until backup arrived before approaching Clark to help him, police said.

The encounter unfolded behind Clark’s grandparents’ home, where he was staying, according to the Sacramento Bee newspaper, which spoke to his relatives.

Sacramento prosecutors were investigating the incident.