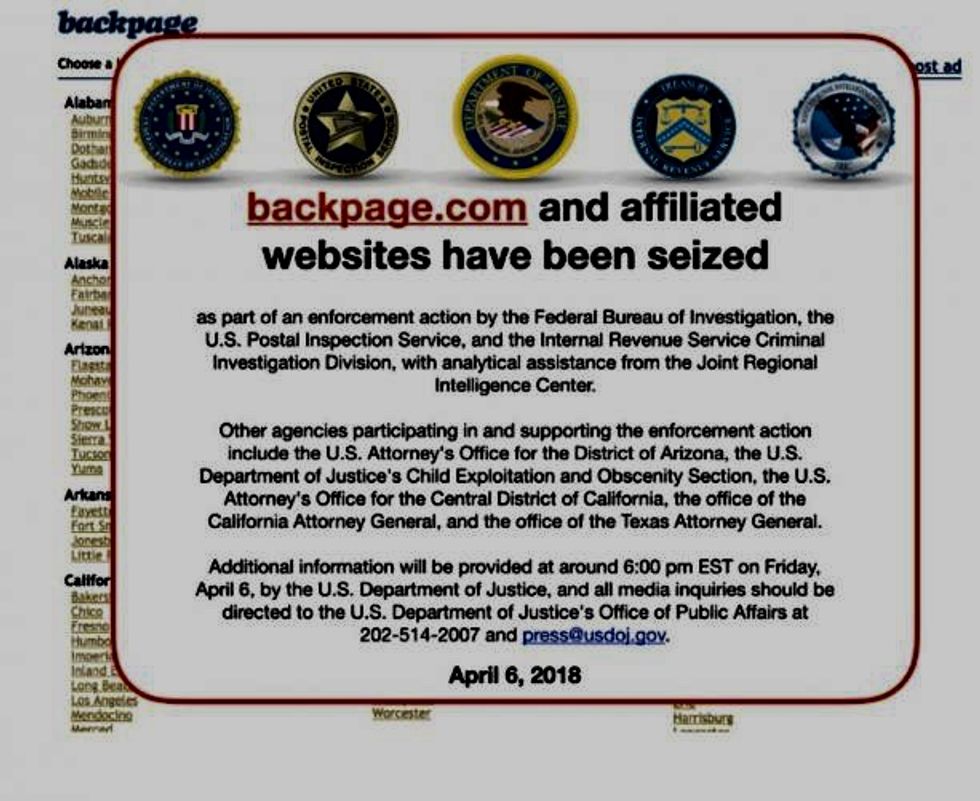 An image of the current home page of the website backpage.com shows logos of U.S. law enforcement agencies after they seized the sex marketplace site April 6, 2018. backpage.com via REUTERS

Two co-founders of Backpage and top executives of the classified advertising website have been indicted on charges of enabling prostitution and money laundering.

Backpage was abruptly shut down by the US authorities on Friday and the indictments, by a federal grand jury in the southwestern state of Arizona, were unsealed on Monday.

"For far too long, Backpage.com existed as the dominant marketplace for illicit commercial sex, a place where sex traffickers frequently advertised children and adults alike," Attorney General Jeff Sessions said in a statement.

"But this illegality stops right now," Sessions said. "It can no longer be used by criminals to promote and facilitate human trafficking."

Among those indicted were Michael Lacey, 69, and James Larkin, 68, who launched the site in 2004 along with another individual identified in the indictment only by the initials "C.F."

Although the pair sold their interests in Backpage in 2015, the indictment said they had since "retained significant control over the website," receiving tens of millions of dollars.

The seven are residents of Arizona and Texas.

"This website will no longer serve as a platform for human traffickers to thrive," FBI Director Christopher Wray said. "Whether on the street or on the internet, sex trafficking will not be tolerated."

Backpage has been accused of being the biggest website for prostitution in the world, with its classifieds used to promote paid-for sex with minors and victims of human trafficking.

The US Congress passed a bill last month that allows victims of sex trafficking to seek justice against website owners who knowingly promote or facilitate the practice.

Supporters hailed the passage of the Stop Enabling Sex Traffickers Act (SESTA) as a major victory.

But the measure is not without its critics -- some say it would undermine a basic underpinning of the internet which enables websites to host information from third parties without liability.