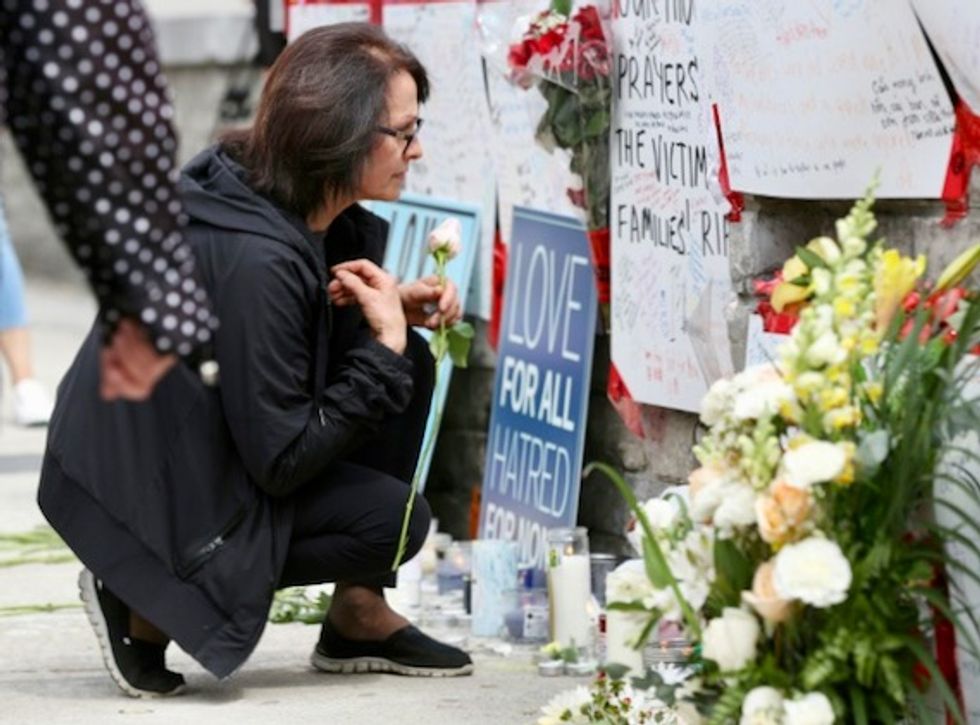 A woman prays at a makeshift memorial for victims of the van massacre in Toronto, which left 10 dead AFP / Lars Hagberg

A Canadian man who apparently had a grudge against women was charged with murder Tuesday after allegedly plowing a rented van onto a crowded Toronto sidewalk, killing 10 people -- an incident that shocked the nation.

Police said the suspect, 25-year-old Alek Minassian, was not known to them before Monday's carnage in Canada's most populous city, which also left 14 people injured. Most of the victims were women.

Public Safety Minister Ralph Goodale played down any suggestion that the attack bore the hallmarks of those carried out by truck-driving extremists in London, Nice and other cities, saying "there is no discernable connection to national security."

But authorities said the incident during the busy lunch hour Monday was undoubtedly deliberate.

Lead investigator Detective-Sergeant Graham Gibson said Minassian had posted a "cryptic message on Facebook minutes before he began driving the rented van" along a long stretch of Yonge Street, eventually jumping the curb onto the sidewalk.

In the post, Minassian praised mass killer Elliot Rodger -- a 22-year-old American who murdered six people and then killed himself in California in 2014, and who had professed frustration over his virginity and women rejecting him.

The suspect's post also referred to the "Incel Rebellion" -- "incel" is short for "involuntarily celibate" and is often used in connection with online groups of sexually frustrated men who are known to rant against women.

"We will overthrow all the Chads and Stacys!" the post read, monikers used in the community to describe people who have no trouble finding sexual partners.

Gibson said the victims of the Toronto attack were "predominantly women" and ranged in age from the mid-20s to 80s.

Minassian also referred to himself on social media as a private in the army. Canadian military spokeswoman Jessica Lamirande confirmed that he enlisted last August but asked to be discharged after only 16 days of basic training.

Minassian stood impassively with his hands behind his back, wearing a white police jumpsuit. He was calm as he was led away.

The suspect is scheduled to return to court on May 10 for a bail hearing.

Several of the victims were named in court documents, but others were still being identified by the coroner, who brought in extra help overnight.

The first of the dead to be publicly identified was Anne Marie D'Amico, who worked at an investment management company near the scene.

Her family called her a "shining light," saying in a statement: "We hope that in this time, people fight with the same altruism (she had) rather than anger and hatred."

Two South Koreans were among the dead, a foreign ministry official in Seoul told AFP, adding that another of the country's citizens was seriously injured.

A Jordanian national was also killed.

Minassian lived with his father in the Toronto suburb of Richmond Hill, and police searched the home on Tuesday.

Students who attended a vocational school with the suspect described him as withdrawn and awkward.

Ari Blaff, who went to high school with Minassian, told public broadcaster CBC that his behavior "was usually quite strange."

But Blaff said he'd "never noticed anything violent" -- the suspect just "made people feel uneasy around him."

Minassian's mother told a community newspaper in 2009 that he suffered from a form of autism known as Asperger's syndrome.

On Tuesday, police continued to comb the crime scene for evidence, while crowds gathered at a makeshift memorial to leave messages of condolences and flowers.

Ontario Premier Kathleen Wynne was among those who stopped to leave flowers, pausing to read cards left in remembrance of the dead.

In Ottawa, Prime Minister Justin Trudeau told a news conference: "Canadians across the country are shocked and saddened by this senseless attack."

But, he added: "We must not start living in fear and uncertainty every day as we go about our daily lives."